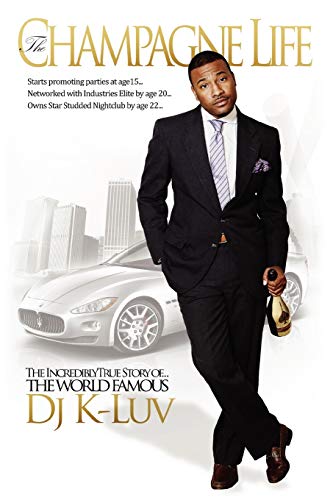 Entertainment's industry leaders portray a "rags to riches" phenomenon that suggests that those who become successful simply transition from the sidewalk to the Bentley overnight. Hip-Hop culture celebrates the luxurious lifestyle but often ignores the journey of making it to the top. The Champagne Life is the often humorous and ironic, incredibly true story of Kobie Randolph, his alter ego, "The World Famous DJ K-LUV" and his road to breaking into the entertainment industry. The Champagne Life allows its readers to walk in the shoes of Kobie Randolph as a 15-year-old high school student with a big imagination, and high ambitions of becoming a successful party promoter. Through his college experiences at Tennessee State University, he is able to share the road map to building an event-marketing empire and explains how his constant hustle takes him places and positions him in situations unimaginable. The Champagne Life highlights the relationships Kobie has established with the entertainment industry's elite and the sacrifices he undertook to establish them. Kobie has brushed shoulders with the likes of: Diddy, Lil Wayne, T.I, Russell Simmons, Taraji P. Henson, Meagan Good and Beyonce Knowles-Carter just to name a few. Take the journey with Kobie Randolph as he shares the true story on how he made his dreams become a reality by opening his very own star-studded nightclub in 2010 at the young age of 22 - making him the youngest nightclub owner in America. Through hard work, ambition and a big imagination, Kobie tells his true life story on how he makes it to The Champagne Life.