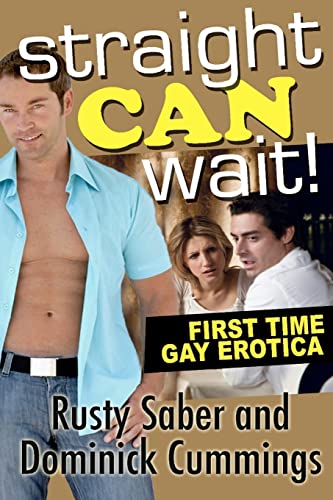 In STRAIGHT CAN WAIT, Erotica writers Rusty Saber and Dominick Cummings explore the world of “straight” men having their first gay sexual experiences...sometimes under very taboo circumstances! In “My Step-Brother, My Lover”, Scott has had a crush on his handsome athletic straight older step-brother, Hank, since they met during high school. When Hank pays Scott a visit after a painful divorce, Scott finds out his step-brother may be open to being comforted...in a new man to man way! Handsome, educated, and well-endowed African American attorney, Tyrone, never dreamed he could or would even want to be one of those DL guys. But in “The Married Black Man’s DL White Lover,” Tyrone finds himself tempted when his wife starts to lag behind on her wifely duties and his new young cute executive assistant makes it a point to tell Tyrone he likes his coffee only one way...strong and black! More than one thing can leak in a dark, musty basement! In “Basement Leak,” an apartment manager brings new meaning to “pipe cleaning” after one too many drinks with a friendly tenant who just happens to be on the outs with his girlfriend. Also included is a bonus novelette, “The Dominatrix’s Demands” by Dominick Cummings. Zach and Matt are two former frat brothers turned accountants looking to add some spice to their life. Enter Lady Victoria, a professional dominatrix, who forces them not only to submit but to explore their most hidden subconscious sexual desires. When Lady Victoria reveals her ultimate pleasure fetish, how far will the two men go WITH EACH OTHER to please her?