Items related to Self-reliance and Other Essays

Self-reliance and Other Essays 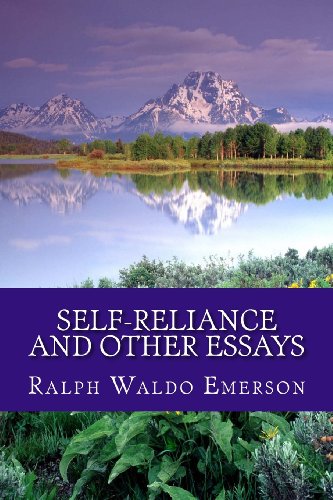 One of America’s pre-eminent philosophers, Ralph Waldo Emerson was born into a long line of ministers and preachers. He attended Harvard at the tender age of 14, where he studied to fulfill his destiny and become a minister. Emerson eventually dropped out of this line of work, embarking on a career as a public speaker and serving as the intellectual center of a group called the Transcendentalist Club. This book contains some of Emerson's best-known essays, specifically "Self-Reliance," as well as his address to the Harvard Divinity School. Emerson's philosophy, although sometimes painfully explicated upon in his own writings, is best summed up by the word "individualism." To Emerson, it is the individual that should be the fulcrum point in all aspects of life. Emerson then took this philosophy and applied it to a myriad of subjects. "Self-Reliance," Emerson's masterwork, attempts to explain how man should retain his individualism in the face of society. It is society that stifles the individual, and the trick is to be true to yourself and your conscience. Law should not be, and is not, above the individual. Again, conscience should rule the day. Every man must follow his conscience even if doing so endangers his role in society. This tension between the individual and society Emerson enumerates continues to reverberate to this day. In his address to the Harvard Divinity School (which got Emerson banned from the school for years), he addresses individualism in the context of religion. Emerson, himself a trained minister who eventually resigned his pulpit, urges those about to embark on a career in the clergy to reach inside themselves when preaching. Don't rely on the same old tired formulas everyone else relies on, Emerson says, but see what the holy word means to you and then express what you find to your flock in your own way. Several other essays round out the collection, all of them utilizing Emerson's keen sense of the power of the individual. That Emerson is still in print today while some of his contemporaries are not is proof enough of the power and influence of his thought. Whether you agree with his arguments or not, there is no denying that he has been enormously influential to American thinkers of his time and those who have followed.

Ralph Waldo Emerson (1803–1882) was an American essayist, lecturer, and poet, who led the Transcendentalist movement of the mid-19th century. He was seen as a champion of individualism and a prescient critic of the countervailing pressures of society, and he disseminated his thoughts through dozens of published essays and more than 1,500 public lectures across the United States. Emerson gradually moved away from the religious and social beliefs of his contemporaries, formulating and expressing the philosophy of Transcendentalism in his 1836 essay, Nature. Following this ground-breaking work, he gave a speech entitled The American Scholar in 1837, which Oliver Wendell Holmes, Sr. considered to be America's "Intellectual Declaration of Independence". Considered one of the great lecturers of the time, Emerson had an enthusiasm and respect for his audience that enraptured crowds. Emerson wrote most of his important essays as lectures first, then revised them for print. His first two collections of essays – Essays: First Series and Essays: Second Series, published respectively in 1841 and 1844 – represent the core of his thinking, and include such well-known essays as Self-Reliance, The Over-Soul, Circles, The Poet and Experience. Together with Nature, these essays made the decade from the mid-1830s to the mid-1840s Emerson's most fertile period. Emerson wrote on a number of subjects, never espousing fixed philosophical tenets, but developing certain ideas such as individuality, freedom, the ability for man to realize almost anything, and the relationship between the soul and the surrounding world. Emerson's "nature" was more philosophical than naturalistic; "Philosophically considered, the universe is composed of Nature and the Soul." While his writing style can be seen as somewhat impenetrable, and was thought so even in his own time, Emerson's essays remain one of the linchpins of American thinking, and Emerson's work has greatly influenced the thinkers, writers and poets that have followed him. When asked to sum up his work, he said his central doctrine was "the infinitude of the private man."

1. Self-Reliance and Other Essays

Book Description CreateSpace Independent Publishing Platform. Paperback. Condition: Good. A copy that has been read, but remains in clean condition. All pages are intact, and the cover is intact. The spine may show signs of wear. Pages can include limited notes and highlighting, and the copy can include previous owner inscriptions. At ThriftBooks, our motto is: Read More, Spend Less. Seller Inventory # G1463772114I3N00

2. Self-Reliance and Other Essays

Book Description CreateSpace Independent Publishing Platform. Paperback. Condition: Good. A copy that has been read, but remains in clean condition. All pages are intact, and the cover is intact. The spine may show signs of wear. Pages can include limited notes and highlighting, and the copy can include previous owner inscriptions. At ThriftBooks, our motto is: Read More, Spend Less. Seller Inventory # G1463772114I3N00

3. Self-reliance and Other Essays

Book Description CreateSpace Independent Publishi, 2011. Paperback. Condition: Good. Connecting readers with great books since 1972. Used books may not include companion materials, some shelf wear, may contain highlighting/notes, may not include cdrom or access codes. Customer service is our top priority!. Seller Inventory # S_280818472

4. Self-reliance and Other Essays