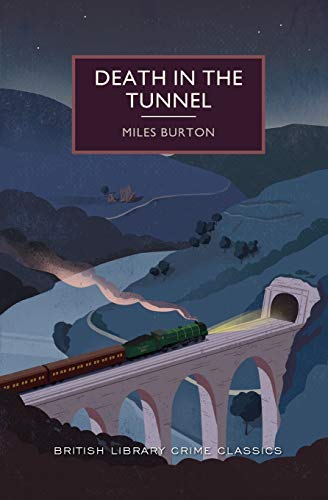 "This offering in the British Library Crime Classics series is part of a popular subgenre of the time, called the 'railway murder mystery.' The train setting was ideal for encasing a wide variety of people in one place, giving them myriad chances for meetings and murder." ―Booklist

On a dark November evening, Sir Wilfred Saxonby is travelling alone in the 5 o'clock train from Cannon Street, in a locked compartment. The train slows and stops inside a tunnel; and by the time it emerges again minutes later, Sir Wilfred has been shot dead, his heart pierced by a single bullet. Suicide seems to be the answer, even though no reason can be found. Inspector Arnold of Scotland Yard thinks again when he learns that a mysterious red light in the tunnel caused the train to slow down.

Finding himself stumped by the puzzle, Arnold consults his friend Desmond Merrion, a wealthy amateur expert in criminology. To Merrion it seems that the dead man fell victim to a complex conspiracy―but the investigators are puzzled about the conspirators' motives, as well as their identities. Can there be a connection with Sir Wilfred's seemingly untroubled family life, his highly successful business, or his high-handed and unforgiving personality? And what is the significance of the wallet found on the corpse, and the bank notes that it contained?

MILES BURTON was a pseudonym of Cecil Street (1884-1964), a British soldier who became a prolific novelist in the 1920s. He was the author of approximately 140 detective novels, of which the most highly regarded were published under the names Miles Burton and John Rhode.

Review:
Death in the Tunnel is certainly not a character-driven novel. I would say that character development is kept to a bare minimum. But the abundance of clues and the way that they are shared with readers, keeps one reading to see who did it.~~~The novel was first published in 1936. It has recently been republished. I am glad to see more golden-age mystery novels being brought back into print. This is one of my favorite genres. (NetGalley)

This offering in the British Library Crime Classics series (which reissues out-of-print mysteries from the Golden Age of crime fiction, between WWI and WWII) is part of a popular subgenre of the time, called the “railway murder mystery.” The train setting (think Christie’s Murder on the Orient Express, 1934, published two years before this one) was ideal for encasing a wide variety of people in one place, giving them myriad chances for meetings and murder. Death in the Tunnel is a variant of the locked-room mystery. A train comes to a screeching halt in the middle of a two-and-a-half-mile-long tunnel. The body of Sir Willfred Saxonby is discovered shot to death afterward, in a locked first-class compartment. All the evidence points to suicide, but, as a Scotland Yard inspector, aided by his friend, a brilliant amateur sleuth, investigates, what seem to be trifles in timing and coincidence point to murder. Who knew railroad timetables and tunnel gradients could make for so much suspense? (Booklist)

Death in the Tunnel is an old style mystery. The main focus is on the "how" and not on the "why" the crime was committed. In a way it was like a Clue game, the reader can follow the trail of clues and try to find the murderer. I enjoyed it. (GoodReads)

It's so common for a mystery to set up a really corking situation, only to fizzle in the solution and that doesn't happen here. The plotting was clever, if a bit confusing at a time ("who's that, now?"), and the solution satisfying. I look forward to more. (NetGalley)

"Death in the Tunnel" is a mystery novel that was originally published in 1936. It's a complex, clue-based puzzle mystery. The Inspector was quite willing to go with the "obvious suspect," but things didn't quite add up so he consulted with his imaginative, amateur sleuth friend. This friend actually used quite a lot of logic to form suggestions of what to look into further. The focus of the story was on the details of the crime rather than on developing the characters or setting.~~~For all its complexity, I was quite certain of whodunit and had an overall idea of howdunit by about 40% of the way through. The author did a good job of drawing attention away from important points, though, and the main characters weren't stupid. It's simply that it took some time for them to work through the conflicting clues. The story kept my attention as I was curious to see the motive (which later became clear), the exact details of how it was done, and even how the main characters figured it out.~~~There was no sex. There was a minor amount of bad language. Overall, I'd recommend this intriguing mystery. (GenreReviews)

Death in the Tunnel is an intriguing book from the Golden Age of Detective fiction and comes recommended especially for fans of "train crime." There's no CSI―just painstaking, logical police work, and in this book, the troubling aspects of the case are easy to grasp. (NetGalley)

I can't say much at all about the plot without giving too much away, but I can tell you many things I loved about this book.~~~I believed in all of the people in the story, and the things they said and did. The crime was extraordinary, but I could quite easily believe that this was the same world where my grandparents lived, and that maybe they had read about the case in the newspaper, and talked about it.~~~I appreciated the relationship between Arnold and Merrion. One was a steady worker with all of the resources of the police at his disposal; the other was an ideas man in possession of the sharpest of minds. They made a great team and they had a mutual respect that I really appreciated.~~~And I loved that small pieces of evidence were assembled, steadily building a case against the murderer. The plotting is clever and complex, red herrings are very well deployed, and the story twisted and turned beautifully. It's very much a puzzle mystery; there's a solid motive for the murder, the psychology is there but it is very simple.~~~I had to keep turning the pages, and I was sorry to reach the last one.~~~But I see that Inspector Arnold and Desmond Merrion investigated quite a few more cases, that one is already on its way back into print, and I hope that others will follow. (NetGalley)