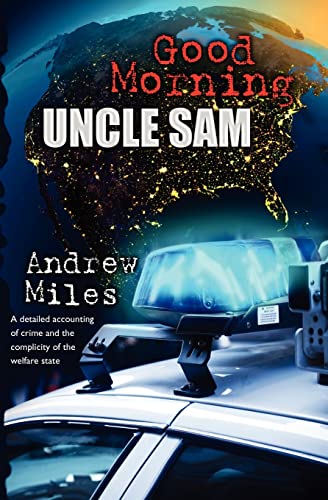 In the most trying financial period in almost a century, it is the voice of everyday Americans--not elected officials, not corporate CEOs, not powerful lobbying groups--that can change the current system.  For Andrew Miles and many citizens like him, the time to raise that voice for change is now. Tired of profligate spending, sick of watching handouts benefit the few while the many suffer, and angry over the gross mismanagement occurring in our government, Americans are making themselves heard in a way that hasn't been seen since the Vietnam War protests of the 1960s. And just like that era, the terrible effects of poor decision-making need to be laid bare and made clear.A grassroots examination of the societal effects from a criminal justice perspective that offers a street-level view of the problems created by an out-of-control government and an overwhelmingly liberal judiciary, Andrew Miles' analysis is a patriotic call to arms to reclaim our country's greatness and forego the free--and often counterproductive--ride too often offered in too many sectors. A police officer for the past seventeen years, his blunt, factual view is based on thousands of hours working on America's streets. Focusing on the human impact as well as the fiscal, Miles provides a new side of the debate concerning entitlement programs. With concern and compassion he explores the relationship between poverty and incarceration in the American criminal justice system, how it leads to imprisonment rather than rehabilitation, and the consequences and economic effect it has on the rest of the country. It is, in effect, a mirror of the bailouts of corporate giants, merely creating a system of handouts wherein the cycle repeats and the burden is placed squarely on those who form the backbone of America: the middle class. A healthy dose of reality and hope, Miles' no-nonsense polemic is a cold shock to an American system desperately in need of it. Covering a well-rounded series of topics that address the current state of the prison and government aid cycles thoroughly and thoughtfully, he takes his analysis to the crucial final step of providing possible solutions. An empowering exploration that is sure to change the way you look at our country, Good Morning Uncle Sam is a clarion call for reform and return to the greatness upon which America was founded.

In the worst economic period since the Great Depression, the United States' entitlement programs are weighing down an already overburdened economy. Too many have become dependent upon the handouts and free money that subsidize a life devoid of hard work, morality and sacrifice.

Examining these and related issues at the level of the streets, author Andrew Miles' blunt, factual point of view is a refreshing blast of cold air to an American system desperately in need of a wake-up call. Focusing on the human impact as well as the fiscal, he tackles the difficult subjects of incarceration versus rehabilitation and welfare versus being a working, contributing member of society. Offering solutions with his analysis, he covers such topics as:

A grassroots level examination of the societal effects from a criminal justice perspective that offers a street-level view of the problems created by an out-of-control government and a liberal judiciary, Good Morning Uncle Sam is a patriotic call to arms that will fundamentally change the way you see these problems--and their solutions.

Andrew Miles is a certified police instructor who founded his department's Nuisance Abatement Unit, a unit that has won many awards including The International Association of Chiefs of Police Award for best community policing.

Andrew Miles is a certified police instructor and has taught at the Arkansas Criminal Justice Institute, the Arkansas Attorney General's Office, and the US Attorney's Office. Miles has won numerous personal awards, most notably Officer of the Year by his agency and Police Officer of the Year for the Military Order of World Wars. He has been a police officer for seventeen years and founded his department’s Nuisance Abatement Unit, a unit that has won many awards including The International Association of Chiefs of Police Award for best community policing and the MetLife Foundation’s Community Policing Partnership Award.