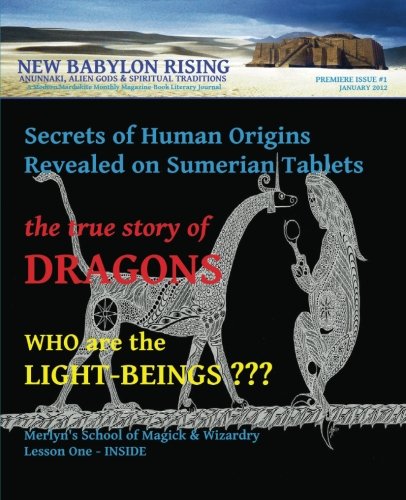 OUT OF PRINT - NEW BACK ISSUES STILL AVAILABLE!* Secrets of Human Origins Revealed on Sumerian Tablets,* The True Story of the Real Dragons of Sumeria,* Ancient & Shinning Ones: Who are the Light-Beings?,* Merlyn's School of Magick & Wizardry begins! Lesson One inside!AFTER more than three years of bringing the work of the Mardukite Chamberlains to the public in strictly full-length book form, it has long been anticipated to make our extensive work, existent and continuing, into an affordable and accessible format. Monthly installments also make the overwhelming appearance of the materials even more available to the current truth seeker and readers.NEW BABYLON RISING - A Modern Mardukite Monthly Magazine Book Literary Journal developed by Joshua Free and the Mardukite Truth Seeker Press for the Mardukite Chamberlains and now available to the general public as well!Regular monthly lesson and article installments include: the Anunnaki Legacy, Sumerian Religion & The Anunnaki Gods, Mesopotamian Magick, Clay Tablet Transliterations, Nabu Priest-Scribe's Sanctuary, Book Reviews and much more!

Joshua Free first began by receiving personal apprenticeships from his early years and progressing through his entire life, including various Christian Gnostics, Rosicrucians, Freemasons, members of the Hermetic Order of the Golden Dawn, O.T.O. Ordo Templi Orientis, A.A. Argentium Astrum among others. He was officially initiated into the Pheryllt Druid tradition at the age of 12 and began leading his own Gnostic Druid organization at 13. Joshua Free is the founder of Mardukite Ministries (2008) and the prolific author of many works including Sumerian Religion, Babylonian Myth & Magic, The Sorcerer's Handbook of Merlyn Stone, The Necronomicon Anunnaki Bible, and many others. In the 1990's he was the youngest initiate of the Order of Bards, Ovates and Druids in England until he left to independently pursue the origins of the Celtic Druids - resulting in the "Book of Elven-Faerie". Although best known for his work on Sumerians, the Anunnaki and Babylonian Tradition for the "Mardukites", his work on the Dragon Legacy and modern Pheryllt Druid tradition is also paramount. His writing has even been used to introduce the third volume from Douglas Monroe, "The Deepteachings of Merlyn" (published 2011).