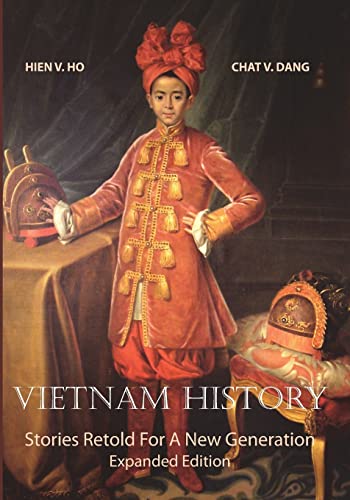 BISAC category: History / Asia / Southeast Asia (Grade 8 and above, updated December 26, 2017) For English readers wishing to learn more about Vietnamese history and culture, especially the latest scholarly knowledge about the origins of the modern Vietnamese, the choices are abundant. However, while valuable memoirs have been written by Americans about their unique experiences during the Vietnam War, an informative English text about the History of Vietnam written by Vietnamese-Americans is still a rare encounter. Able to peruse French, English, and Vietnamese writings, the authors have committed themselves to produce a well illustrated book which addresses most aspects of Vietnamese history and culture (e.g. ancestral myths, historic legends, traditional beliefs) for the new generations. There is no intent to refight old battles or to appeal to cultural pride, just stories, as unbiased and documented as possible, about a country and its people that deeply impacted America. Of note, the authors have succeeded to weave in their historical accounts many legends and tales symbolic of the rich cultural treasure of Vietnam. Each of the authors may have shown a certain professional bias. The surgeon (Dang) uses a more dissecting and analytical approach in his treatment of complex topics (e.g. reviewing the whole Vietnam history in one chapter and analyzing the Viet identity in another) or national heroes (e.g. General Ly Thuong Kiet, author of the first Vietnamese Declaration of Independence; General Tran Hung Dao, who vanquished the Mongols; Le Loi in his 10-year struggle against the Ming occupation army). On the other hand, the pediatrician (Ho) tends to choose younger, lesser heroes (e.g. Lady Trieu instead of the famous Trung Sisters), notable either for their precocity (e.g. Ky Dong who became Gauguin’s friend; Cao Thang who manufactured firearms; Le Quy Don with his presence of mind and erudition) or their exceptional position at a turning point of history (e.g. Little Prince Canh who met Thomas Jefferson and Queen Marie Antoinette in Paris at a period when revolutions occurred in the US, France and Vietnam; exiled King Duy Tan who supported Charles de Gaulle and fought as a Major in the Free French navy during World War II). A few chapters use original sources: old French and English documents pertaining to the conditions of Vietnam when first exposed to the West and the Christian religion in the 17th century, and when falling prey to French colonialism in the second half of the 19th century. The book also includes reviews of Vietnamese Buddhism, traditional medicine, firearms, and astronomy in the Middle Ages. It concludes with an assessment of the recent adaptation of the Vietnamese diaspora to its new life in America.