Items related to Fables and Fantasies: A 5 Story Collection

Fables and Fantasies: A 5 Story Collection 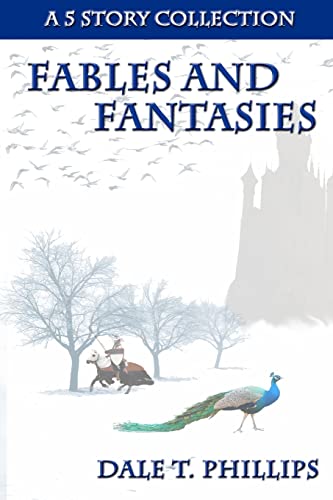 This collection of five different tales gives some new takes on old stories, and is a mix of fear, fun, and fantastic elements. Some of these stories are humorous, some are scary, some end well, some badly, and some have mixed blessings for those involved. Kind of like life. Fable and fantasy blend to make a journey into other lands and times and magics.

It's like following a familiar road, only to discover a new, unusual side path that takes you to an alternate destination. Here are new worlds to explore, with magic, swords, vampires, princesses in peril, and choices to be made. Heroes and villains and something in between. Monsters, both internal and external. Encounters with the unusual to make you think, laugh, and shiver with fright.

For the longest time, I could never figure out why adults would tell fairy tales (especially those of the Brothers Grimm, which were rather grim) to young children, presenting kids a world of oddly cruel behaviors and child-menacing monsters. Sounded like pretty gruesome stuff for such tender sensibilities. Were they supposed to be precautionary tales? Don't pick flowers off the path? Be suspicious if someone leads you deep into the woods? Mom thinks it's a bad idea to trade our cow for magic beans, but we really know better?

And what's up with those leaps in the narrative, and fantastic elements of magic and mayhem? What were we supposed to learn from those?

I preferred the stories as shown in the Rocky and Bullwinkle cartoon show's Fractured Fairy Tales, where they would take a well-known old chestnut and twist it into something funny, with a different moral, a shaggy-dog pun at the end. Laughing at these tales seemed far better than being creeped out by hearing how grownups were abandoning you to the wolves.

Then I read Bruno Bettelheim's The Uses of Enchantment, and I understood. Childhood is a terrifying existence at the whim of irrational giants, where disaster is a step away, even if one has done nothing to deserve it. The monsters can come at any time-- and they might well be your own family. Fairy tales are a way of telling children, via story (the most powerful teaching method of all) that they can fight back and sometimes win: Hansel and Gretel pushing the witch into the oven, Jack defeating the giant, the evil queen being bested. I finally got why fairy tales are so important from such a young age. Fantasy allows us to expand our world, try out roles. It allows us to see the world in a different way.

But my reading tastes changed as I got older, and the fairy tales didn't always have a happy ending-- sometimes the monsters won. We don't all live happily ever after. Life is a mixture of good and bad outcomes, and the modern fantasy story can go either way.

So here are a handful of tales for your enjoyment. Some are funny, some scary, some end well, and some have mixed blessings to those in the story. Kind of like life.

If you like this collection, try More Fables and Fantasies, also by Dale T. Phillips