Items related to We Are Going In: The Story of the Grand Canyon Disaster

Nelson, Mike We Are Going In: The Story of the Grand Canyon Disaster

We Are Going In: The Story of the Grand Canyon Disaster 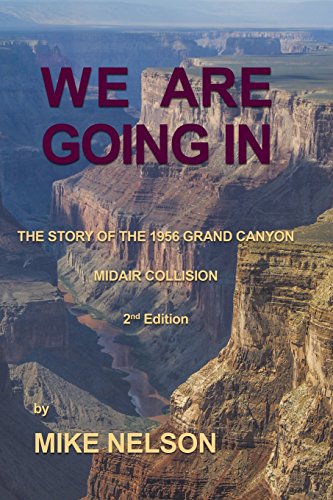 We Are Going In is the story of a tragedy. It is a search for the truth told as an authoritative documentary, presenting some of the author's theories about what happened along with a great deal of established or irrefutable fact, and distinguishes the two plainly from each other as it goes along. The book is written in a spirit of compassion, and as a result is as dramatic and moving as it is informative. It uniquely falls into several categories not often melded with each other: humaneness, incisive factuality, and undeniable spirituality, on a level not religious but definitley transcending worldly existence. The author's style moves back and forth between mundane or technical subjects, or the grave, terrible circumstances and events that caused the accident, and surprisingly pertinent, compelling insights into the human psyche and the spiritual underpinnings of the physical world. The technical passages are clearly explained in layman's terms and give the reader a deep sense of understanding what happened. On the other hand, for the reader who may prefer to enjoy the book simply as a drama, the author provides an outline of where most of the technical sections are, and has written the book in such a way that these can be skipped without disrupting the continuity or the substance of the story. Though this is a serious and tragic story, it is also embellished here and there with bits of tasteful humor, never at the expense of the victims, whose loss has no humor in it whatsoever, but often to poke fun at the people who would laugh or did laugh at being poked. The total effect takes the reader through the full range of his emotions, and challenges him intellectually. But the main thing is that the book appeals to the human heart and encourages the reader to care. We Are Going In is a history of a disaster, a midair collision over the Grand Canyon between two airliners in 1956, yet leaves the reader with much more.

Mike Nelson grew up primarily in Chicago and its suburbs. As a boy he thrilled at the deafeningly loud, phenomenal sight of propeller-driven airliners taking off and flying very low right over him, as he stood just outside the fences at Chicago's Midway Airport. He also grew up with the somber, reverent stigma of airline tragedy; his uncle had lost his life in an airline disaster. Countless times throughout his childhood the author thought deeply and troubledly about his uncle's final moments aboard that plane, straining to understand and to empathize with him. Never could he fathom or fully accept what had happened, and in mid-life he decided to find out as much as he could. His researches led to a great many surprising places and people, and soon to the completely unexpected resolve to write an entire book about the tragedy. The result is this, his first published book, entitled after the last words of one of the crewmembers. Mr. Nelson holds no formal degrees, although he attended college for three years and was a top scholar. He spent over a decade researching, interviewing, and analyzing, steeping himself in the accident and educating himself in aviation and aeronautics. Writing has been one of his hobbies for his whole adult life, and when he turned his investigations toward the goal of creating a book, he simultaneously began writing with an audience in mind, and developing and refining a style of his own. The route he took to write the present book was both unconventional and more than adequate; the authority, clarity, and eloquence of his prose rival those of many established writers. His other qualifications are sincerity, earnestness, native ability, and dedication. He currently resides on a country acreage with his wife in northeast Iowa.

Mike Nelson has been a writer for more than forty years, primarily focusing on psychology, philosophy, and sociology. Having lost his uncle in the accident described in this book, Mike spent more than a decade studying aviation and aeronautics, researching, interviewing, and analyzing to better understand the incident and his family s loss. In 2014, he gave a speech at the ceremony dedicating the crash sites as a National Historic Landmark. Subsequently, he became one of the founders and directors of a group for people who lost a loved one at that now-protected place. The group has recently opened itself to families of other, similar disasters. Mike relishes steeping himself in the solitude of nature especially on sunny spring, summer, and fall days where he does his best thinking. Mike lives with his wife on a five-acre country homestead in northeast Iowa. They have a thousand trees, native tall-grass prairie, four house cats, transient great horned owls, a welcome population of opossums and raccoons, and an unwelcome population of skunks and woodchucks.

1. We Are Going In: The Story of the Grand Canyon Disaster

Book Description Authorhouse, 2012. Paperback. Condition: VERY GOOD. Pages are intact and are not marred by notes or highlighting, but may contain a neat previous owner name. The spine remains undamaged. Seller Inventory # 1468556363_abe_vg

2. We Are Going In: The Story of the Grand Canyon Disaster

Book Description Authorhouse 2012-04-01, 2012. Paperback. Condition: Very Good. Item is in very good condition. If supplemental codes/CDs for textbooks are required please contact us prior to purchasing as they may be missing. Seller Inventory # DS-1468556363-2

3. We Are Going In: The Story of the Grand Canyon Disaster

Book Description AuthorHouse, 2012. Condition: Good. A+ Customer service! Satisfaction Guaranteed! Book is in Used-Good condition. Pages and cover are clean and intact. Used items may not include supplementary materials such as CDs or access codes. May show signs of minor shelf wear and contain limited notes and highlighting. Seller Inventory # 1468556363-2-4

4. We Are Going In: The Story of the Grand Canyon Disaster