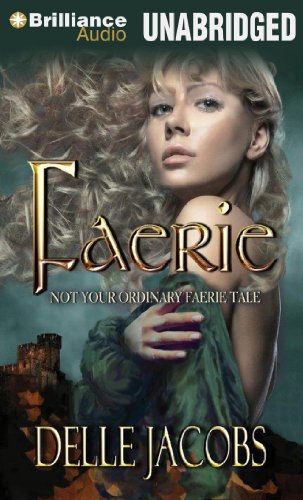 Like her mother before her, Leonie of Bosewood carries Faerie blood in her veins, a secret she harbors to protect her own life. For although the people of eleventh-century England believe in magic, their ignorance and fear have made being different a very dangerous prospect. Caught between the human and Faerie worlds, yet belonging in neither, Leonie must guard her heart...no matter how strong the temptations.

As the king’s emissary, Philippe le Peregrine has watched Leonie mature from gangly girl to alluring woman. With each encounter, his attraction grows, but he knows a match between them can never be. For Philippe hides his own secret, one that has condemned him to a life of lonely celibacy for fear of harming the woman he loves. But when powerful forces prompt them to unite against a sorcerer intent on conquering the world, Leonie and Philippe realize that only together are they strong enough to combat the evil threatening to engulf them.

A native of Illinois, Delle Jacobs has been crafting stories since the tender age of four. She earned a degree in geography from the University of Oklahoma and worked as a cartographer until eventually becoming a social worker specializing in troubled teens and families. Everything changed, however, once she began writing books in 1993, and by 2004, literary success convinced her to quit her day job and focus full time on writing. She is a seven-time finalist for the Romance Writers of America’s Golden Heart Award, which she won an unprecedented three times, in addition to numerous other writing awards for her novels, including His Majesty, the Prince of Toads, Lady Wicked, Sins of the Heart, and Aphrodite’s Brew. Along the way she discovered a knack for designing e-book covers, which is a great way to get her creative juices flowing when her book characters are being particularly uncooperative. She lives today in southwest Washington State with her family.

"I can't remember the last time I enjoyed a book as much as Faerie! It captivated me from the first page and I didn't want to put it down. Delle Jacobs is a beautiful, witty, romantic writer with a flair for unique stories." --Colleen Gleason, best-selling author of The Gardella Vampire Chronicles

"Beautiful and mesmerising, history and magic collide in this incredible, sweeping romance you won't ever forget. Faerie is absolutely enchanting." --Delilah Marvelle, author of Forever a Lady