Items related to In, But Not Of: A Guide to Christian Ambition and the...

Hewitt, Hugh In, But Not Of: A Guide to Christian Ambition and the Desire to Influence the World

In, But Not Of: A Guide to Christian Ambition and the Desire to Influence the World 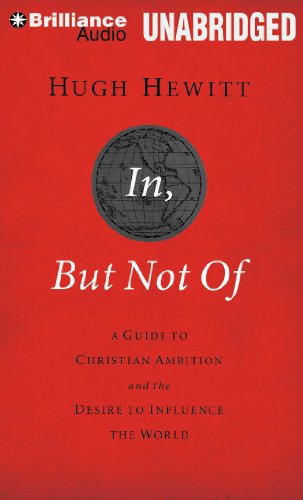 Influence is not accidental. It is earned. In, But Not Of charts the course to acquiring influence over the life of a career while remaining committed to the commands and example of Christ. Broadcast journalist and law professor Hugh Hewitt not only challenges us to become more engaged in steering the course of history through politics, law, finance, and entertainment, but he also maps out simple, effective strategies that will enable us to bring our visions of influence to pass.

Hugh Hewitt is the host of The Hugh Hewitt Show, a nationally syndicated radio talk show, now in its second decade, a professor of law at Chapman University School of Law, and a partner in the law firm of Hewitt, Wolensky in Newport Beach, California. He is the New York Times best-selling author of If It’s Not Close, They Can’t Cheat. Hewitt received three Emmys during his decade of work as cohost of the PBS Los Angeles affiliate KCET’s nightly news and public affairs show Life & Times. Hewitt is a columnist for Townhall.com and the Washington Examiner.