Items related to March to the Sea (Prince Roger)

March to the Sea (Prince Roger) 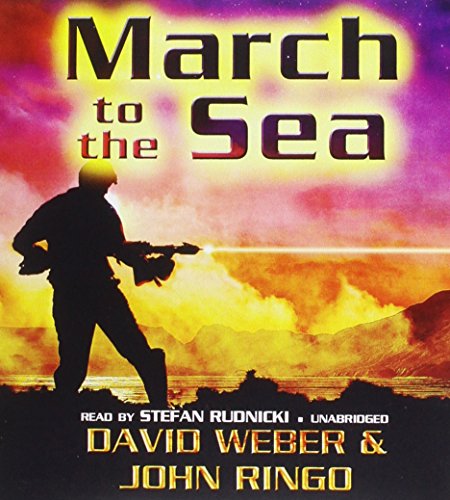 Prince Roger MacClintock, Tertiary Heir to the Throne of Man, was a spoiled rotten, arrogant, whiny, thoroughly useless young pain in the butt. But that was before an assassination attempt marooned the Royal Brat and his bodyguards on the planet Marduk, and before they had to march half way around the planet, through 120-degree heat and five-hour rainstorms in jungles full of damnbeasts, capetoads, killerpillars, and atul-grak, not to mention hostile peoples, to make their way back to port. Under the right circumstances, even the most spoiled brat can grow up fast, and it turns out that, under his petulant exterior, Prince Roger is a true MacClintock, a scion of the warrior dynasty that created the Empire of Man. Now both Prince and bodyguards are determined to get each other off the planet alive. Of course, the planet has other ideas.

David Weber is author of the New York Times bestselling Honor Harrington series as well as other popular novels, including some based on his Starfire science fiction strategy game. He lives in South Carolina with his wife and their three children.

In this admirable continuation of the authors' March Upcountry (2001), Prince Roger McClintock and his diminishing band of Royal Marines are still on the soggy, hot planet Marduk and still having an interesting time. Their way to the sea and their ultimate goal is barred not only by jungle, swamp, weird wildlife and local politics, but also by a wandering barbarian horde known as the Boman. In addition, the Marines' technological advantage is shrinking faster than their numbers, their vitamins may run out before they reach safety and the course of true or any other love for the prince and female sergeant Nimashet Despreaux is not running smoothly. However, human and Mardukan are able to combine resources including the engineering skills of the city of Diaspra, the wealth of the port city of K'Vaern's Cove, and the military talents of Marine Captain Pahner, exiled Mardukan prince Raster and formidable general Bistem Kar to generate both weaponry and tactics to defeat the Boman. The development of a Mardukan combined-arms force will fascinate sophisticated readers (the manual of arms for a four-armed, 10-foot soldier is a thing of beauty), while the overthrow of the Boman will grip straightforward action lovers in spite of the staggering body count. And there's the distinct hint of at least one more volume about Prince Roger's homeward journey at the end of this one, a hint that will please many. (Aug.)
Copyright 2001 Reed Business Information, Inc.

1. March to the Sea (Prince Roger)