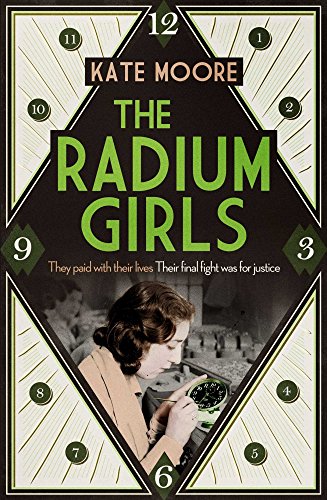 Ordinary women in 1920s America. All they wanted was the chance to shine. Be careful what you wish for. 'The first thing we asked was, "Does this stuff hurt you?" And they said, "No." The company said that it wasn't dangerous, that we didn't need to be afraid.' 1917. As a war raged across the world, young American women flocked to work, painting watches, clocks and military dials with a special luminous substance made from radium. It was a fun job, lucrative and glamorous - the girls themselves shone brightly in the dark, covered head to toe in the dust from the paint. They were the radium girls. As the years passed, the women began to suffer from mysterious and crippling illnesses. The very thing that had made them feel alive - their work - was in fact slowly killing them: they had been poisoned by the radium paint. Yet their employers denied all responsibility. And so, in the face of unimaginable suffering - in the face of death - these courageous women refused to accept their fate quietly, and instead became determined to fight for justice. Drawing on previously unpublished sources - including diaries, letters and court transcripts, as well as original interviews with the women's relatives - The Radium Girls is an intimate narrative account of an unforgettable true story. It is the powerful tale of a group of ordinary women from the Roaring Twenties, who themselves learned how to roar.

Kate Moore is a Sunday Times bestselling writer with more than a decade's experience in writing across varying genres, including memoir and biography and history. She was the director of the critically acclaimed play about The Radium Girls called 'These Shining Lives'.

"Kate Moore's new book will move, shock and anger you" -- The Big Issue

Buy Used
Condition: Fine
465 pp. The story of the women... Learn more about this copy

Book Description Simon & Schuster, 2016. Trade Paperback. Condition: Fine. 465 pp. The story of the women who were poisoned with radium after painting the luminous dials on military dials in 1917 and how they had to fight for justice. Seller Inventory # 44856