Items related to The Untouchable 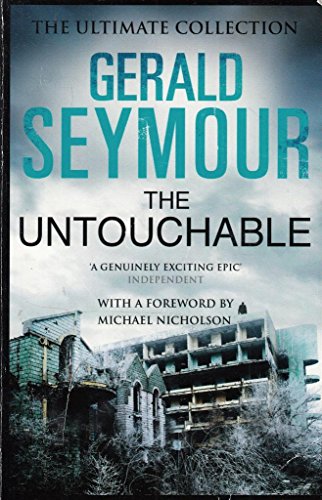 "The finest thriller writer in the world today." SUNDAY TELEGRAPH In London, Albert William Pacher, known as Mister, is master of all he surveys. His core business is heroine, bought in from the Turks in Green Lanes and distributed around the capital. After yet another police case against him collapses, he decides to travel to Sarajevo to expand his empire further - but he is followed by Home Office archivist Joey Cann, who is determined to find a way to bring Packer to justice. In the war-torn and dismal surroundings of Sarajevo, where law and order are administered by gangster warlords, Packer attempts to gain a foothold in new territory. Meanwhile, Joey chips away, uncovering more every day, until he has sufficient momentum to confront him driectly...

Albert William Packer is the supreme baron of London crime. He rules his manor with a cruel, ruthless fist. To those around him, on whatever side of the law, he is the Untouchable.

When another criminal case against him collapses, Packer turns his attention to expanding his heroin empire abroad. Where better to cut out the middle man than at the historic smuggling crossroads of Europe, the Balkans? New men and women are drafted into Customs & Excise unit dedicated to convicting Packer. Only one from the old team survives: the most junior, Joey Cann, retained solely for his obsessional knowledge of the man who calls himself 'Mister'. When Packer leaves for Sarajevo, it is inevitable that Cann be sent after him for 'intrusive surveillance'. The brief: to bring back the evidence that will finally nail Packer to the wall, whatever it takes. In London, it would have been no contest. But here on the war-torn streets of a city where justice is enforced by gangster warlords, Packer is far from home and from what he knows. Here, who will be the Untouchable, who will walk away?

“The finest thriller writer in the world today.” -- Daily Telegraph

“A clever, informed and worldly cynical story about arrogance, obsession and tragedy.” -- The Times

Book Description Paperback. Condition: Very Good. The book has been read, but is in excellent condition. Pages are intact and not marred by notes or highlighting. The spine remains undamaged. Seller Inventory # GOR007223467

Shipping: US$ 5.99
From United Kingdom to U.S.A.
Destination, rates & speeds

Book Description Condition: Very Good. This book is in very good condition and will be shipped within 24 hours of ordering. The cover may have some limited signs of wear but the pages are clean, intact and the spine remains undamaged. This book has clearly been well maintained and looked after thus far. Money back guarantee if you are not satisfied. See all our books here, order more than 1 book and get discounted shipping. . Seller Inventory # 7719-9781473611412

Book Description Condition: Very Good. Shipped within 24 hours from our UK warehouse. Clean, undamaged book with no damage to pages and minimal wear to the cover. Spine still tight, in very good condition. Remember if you are not happy, you are covered by our 100% money back guarantee. Seller Inventory # 6545-9781473611412

Shipping: US$ 12.47
From United Kingdom to U.S.A.
Destination, rates & speeds

Book Description Paperback. Condition: Used; Good. **SHIPPED FROM UK** We believe you will be completely satisfied with our quick and reliable service. All orders are dispatched as swiftly as possible! Buy with confidence! Greener Books. Seller Inventory # 1940823

Book Description Paperback. Condition: Used; Good. **Simply Brit** Shipped with Premium postal service within 24 hours from the UK with impressive delivery time. We have dispatched from our book depository; items of good condition to over ten million satisfied customers worldwide. We are committed to providing you with reliable and efficient service at all times. Seller Inventory # 3040437

Shipping: US$ 14.98
From United Kingdom to U.S.A.
Destination, rates & speeds

Book Description Paperback. Albert Packer is the supreme baron of London crime, ruling his domain with a ruthless fist and thinking of himself as the Untouchable. As yet another criminal case against him collapses, Packer turns his attention to expanding his heroin empire abroad, deciding to travel to Sarajevo himself in order to cut out the middle man. But the Customs &amp; Excise unit tasked with taking him down are determined not to give up. Packer may be king on his home turf, but on the war-torn streets of a city where justice is enforced by gangster warlords, he might just make a mistake. And Joey Cann, obsessed with bringing Packer to justice, will be there when he does. ---length:- '19.8'width:- '12.9'units:- Centimeters. Seller Inventory # 7782749