Items related to The Long Way to a Small, Angry Planet: Wayfarers 1 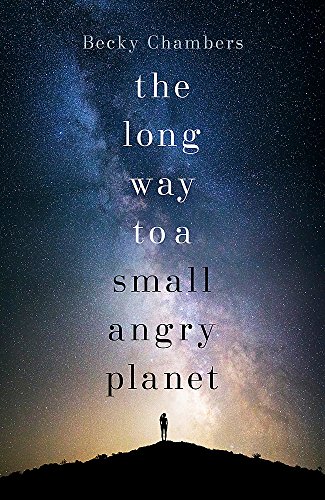 A rollicking space adventure with a lot of heart

When Rosemary Harper joins the crew of the Wayfarer, she isn’t expecting much. The patched-up ship has seen better days, but it offers her everything she could possibly want: a spot to call home, a chance to explore the far-off corners of the galaxy and some distance from her past. And nothing could be further from what she’s known than the crew of the Wayfarer.

From Sissix, the exotic reptilian pilot, to Kizzy and Jenks, the chatty engineers who keep the ship running, to the noble captain Ashby, life aboard is chaotic and crazy—exactly what Rosemary wants. That is, until the crew is offered the job of a lifetime: tunneling wormholes through space to a distant planet. Sure, they’ll earn enough money to live comfortably for years, but risking her life wasn’t part of the job description.

The journey through the galaxy is full of excitement, adventure and mishaps for the Wayfarer team. And along the way, Rosemary comes to realize that a crew is a family, and that family isn’t necessarily the worst thing in the universe . . . as long as you actually like them.

Becky Chambers is the author of the Wayfarers books, which currently include The Long Way to a Small, Angry Planet, A Closed and Common Orbit, and Record of a Spaceborn Few. Her books have been nominated for the Hugo Award, the Arthur C. Clarke Award, and the Bailey's Women's Prize for Fiction, among others, and won the Prix Julia Verlanger in 2017. She grew up in a family heavily involved in space science, and hopes to see Earth from orbit one day.

Book Description Paperback. Condition: Very Good. The book has been read, but is in excellent condition. Pages are intact and not marred by notes or highlighting. The spine remains undamaged. Seller Inventory # GOR007814495

Book Description Condition: Good. Ships from the UK. Former library book; may include library markings. Used book that is in clean, average condition without any missing pages. Seller Inventory # 18731944-20