Items related to The Magical Ritual of the Sanctum Regnum

Levi, Eliphaz The Magical Ritual of the Sanctum Regnum 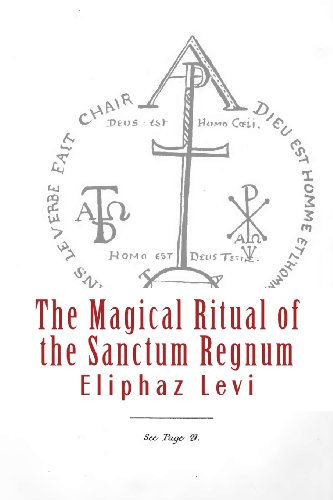 An EXACT reproduction of the original book THE MAGICAL RITUAL OF THE SANCTUM REGNUM originally published in 1896. This book may have occasional imperfections such as missing or blurred pages, poor pictures, errant marks, etc. that were either part of the original artifact, or were introduced by the scanning process. We believe this work is culturally important, and despite the imperfections, have elected to bring it back into print as part of our continuing commitment to the preservation of printed works worldwide. We appreciate your understanding of the imperfections in the preservation process, and hope you enjoy this valuable book. This translation of a previously unpublished work by the late Alphonse Louis Constant, or, as he preferred to call himself, Eliphaz Levi, is from the original manuscript which is in the handwriting of Levi himself. Along with Levi's explanation of the Tarot Trumps "the editor has given a short description of each Tarot Trump at the end of each chapter, and also a few notes on the mystical meanings assigned to the Tarots by Levi in his other works." Eliphas Levi (1810–1875) was the greatest innovator in the revival of Western occultism, most significantly with his great leap of imagination that linked the tarot trumps to the letters of the Hebrew alphabet. He set out his tarot theory in his book "Transcendental Magic," but never revealed its magical application. This was finally made public in 1896 when Dr. Westcott—creator of the Golden Dawn—translated and printed Levi's secret manuscript. This rare book is a must for students of the Tarot and Kabalah. A mystical insight into the TAROT.

Éliphas Lévi (1810-75) was instrumental in the revival of Western occultism in the nineteenth century. This posthumous publication (1896), translated from an unpublished manuscript, outlines the meanings of the twenty-two tarot trumps and includes editorial notes on their iconography. It concludes with Kabbalistic prayers and occult and religious maxims.

The Magical Ritual of the Sanctum Regnum: Interpreted by the Tarot Trumps