Items related to The Decline and Fall of the U.S. Empire: How to Rescue...

Russo, Linda L.; Pappy, Joseph The Decline and Fall of the U.S. Empire: How to Rescue It

The Decline and Fall of the U.S. Empire: How to Rescue It 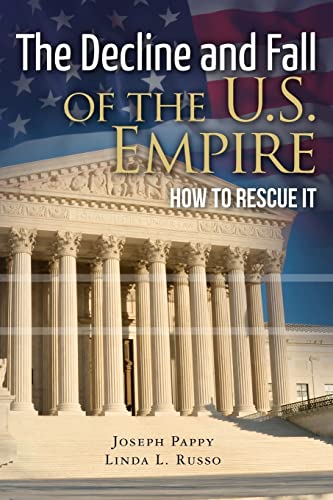 The Decline and Fall of the U.S. Empire has already started. The Congress, the Supreme Court, and the people themselves, though inadvertently, are contributing to this decline and fall. This book will have a profound effect on world peace. According to their belief, killing all those who do not belong to Islam is a privilege of the Muslims alone. Once they realize that killing is not their sole prerogative and that they soon will face fire with bigger fire, Muslims will be forced to tone down the mandate from their Allah as taught in their Qur'an to kill, kill, kill all the unbelievers. The setting is centered around what is known as the Freedom Turf, an open ground at the center of a very popular and inspiring university called Harbard University. Freedom Turf has a small stage at one end where any student can speak on any topic, however controversial it may be, without any fear of being disturbed. These speeches are booked one month in advance with a student by the name of LingLing. This is a place where strange ideas, controversial ideas, new ideas, provocative ideas, scientific ideas, religious and anti-religious ideas, political, governmental and Constitutional criticisms all flourish with impunity and immunity. When strange or new or opposing ideas are presented, only those who want to listen, need to listen. Others walk away smiling. During these days the present climate of religious (Islamic) violence is the major topic being addressed on this Freedom Turf. There are many students who feel that Islam, with its mandate to kill those who do not belong to Islam and bring the world into submission to Allah, is a satanic force. Since the Qur'an repeatedly requires the Muslims to kill the unbelievers, many students feel that Islam is not a religion as envisaged by our Founding Fathers, and hence should not be classified as a religion.

1. The Decline and Fall of the U.S. Empire