Items related to Game Plan: A Radical Approach to Decision Making in... 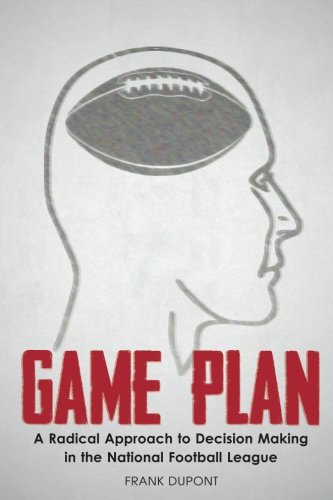 Game Plan is the ultimate book for the thinking football fan. The book tackles the issue of decision making and strategy in the NFL from the viewpoint of a true contrarian. No NFL tradition is sacred in this look at why so many NFL teams have such a difficult time making good decisions. More importantly, Game Plan offers a radical solution that can make almost any team better. Along the way Game Plan makes a number of compelling comparisons between football and other domains. The NFL’s coaches are compared to poker players, while the league’s front offices are compared to doctors. By using analogies like these, Game Plan illustrates how NFL teams can solve their problems by looking at the way that other industries have already solved similar problems. The book is over 55,000 words of anecdotes, comparisons, and analysis that comes together to prove the point that the NFL’s worst teams can climb their way out of the cellar, they just have to change their approach to how they make decisions.

Book Description CreateSpace Independent Publishing Platform, 2012. Condition: Good. Shows some signs of wear, and may have some markings on the inside. Seller Inventory # GRP108829448

Book Description CreateSpace Independent Publishing Platform, 2012. Condition: Good. Former Library book. Shows some signs of wear, and may have some markings on the inside. Seller Inventory # GRP112510479