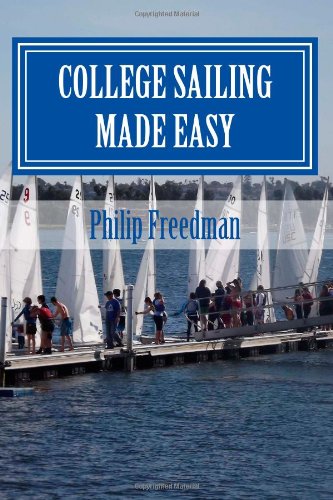 I wrote this book as a guide to the beginning college sailor. As a sailing coach at Arizona State University, I found that out of the forty students who signed up for the team one semester, only four or five had a sailing background and limited at that. I saw a need for an easy-to-read and easy-to-understand book that would not bore the reader to death with sailing terms that didn’t apply to the high school or college sailor. My goal is to make sailing a successful venture not only for the team or club, but for each student wanting to sail. This book will give you a good foundation for going to the next level.

I was the racing coach at Arizona State University sailing team. In 1990, I organized the Betsy Ross America’s Cup campaign as a potential defender of the 1992 America’s Cup in San Diego, California. I also competed in the Olympic Sailing Trials in the Star Class in 1988. Born in Pasadena, California, I attended school in Los Angeles at the University of Southern California. Growing up, I spent my summers sailing and playing tennis on Balboa and Lido Islands by Newport Beach, California. My mother’s sister, Rosemary, was Miss America in 1941 and had a summer house on Lido Island where I spent my days sailing and eating frozen bananas. Not necessarily in that order. I would leave early in the morning and come back when it was time for dinner. I always loved sailing, but I had to drive the boat. Luckily, I always had friends who had sailboats and they let me drive. Tennis became a part of my life as well, and I ended up playing tournaments both in the U.S. and Europe. At eighteen I got my pilot’s license, which launched a thirty-five-year career with the airlines. First I flew with TWA (Trans World Airlines), then with PSA (Pacific Southwest Airlines), and finally with USAir. While with PSA and USAir I was in operations, doing weight and balances. I loved load planning and working with numbers. Sailing and flying go hand-in-hand. The thrust, drag, lift, and weight are so similar that I found it an easy learn. Sailing and flying are just numbers, weather conditions, and geometry.