Items related to All the Light We Cannot See

Doerr, Anthony All the Light We Cannot See

All the Light We Cannot See 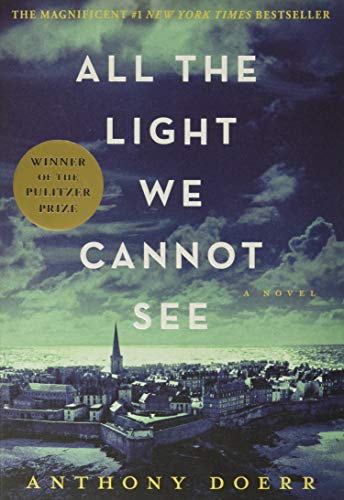 WINNER OF THE PULITZER PRIZE
From the highly acclaimed, multiple award-winning Anthony Doerr, the beautiful, stunningly ambitious instant New York Times bestseller about a blind French girl and a German boy whose paths collide in occupied France as both try to survive the devastation of World War II.

Marie-Laure lives with her father in Paris near the Museum of Natural History, where he works as the master of its thousands of locks. When she is six, Marie-Laure goes blind and her father builds a perfect miniature of their neighborhood so she can memorize it by touch and navigate her way home. When she is twelve, the Nazis occupy Paris and father and daughter flee to the walled citadel of Saint-Malo, where Marie-Laure’s reclusive great-uncle lives in a tall house by the sea. With them they carry what might be the museum’s most valuable and dangerous jewel.

In a mining town in Germany, the orphan Werner grows up with his younger sister, enchanted by a crude radio they find. Werner becomes an expert at building and fixing these crucial new instruments, a talent that wins him a place at a brutal academy for Hitler Youth, then a special assignment to track the resistance. More and more aware of the human cost of his intelligence, Werner travels through the heart of the war and, finally, into Saint-Malo, where his story and Marie-Laure’s converge.

Doerr’s “stunning sense of physical detail and gorgeous metaphors” (San Francisco Chronicle) are dazzling. Deftly interweaving the lives of Marie-Laure and Werner, he illuminates the ways, against all odds, people try to be good to one another. Ten years in the writing, a National Book Award finalist, All the Light We Cannot See is a magnificent, deeply moving novel from a writer “whose sentences never fail to thrill” (Los Angeles Times).

An Amazon Best Book of the Month, May 2014: Does the world need yet another novel about WWII? It does when the novel is as inventive and beautiful as this one by Anthony Doerr. In fact, All the Light We Cannot See--while set mostly in Germany and France before and during the war--is not really a “war novel”. Yes, there is fear and fighting and disappearance and death, but the author’s focus is on the interior lives of his two characters. Marie Laure is a blind 14-year-old French girl who flees to the countryside when her father disappears from Nazi-occupied Paris. Werner is a gadget-obsessed German orphan whose skills admit him to a brutal branch of Hitler Youth. Never mind that their paths don’t cross until very late in the novel, this is not a book you read for plot (although there is a wonderful, mysterious subplot about a stolen gem). This is a book you read for the beauty of Doerr’s writing-- “Abyss in her gut, desert in her throat, Marie-Laure takes one of the cans of food...”--and for the way he understands and cherishes the magical obsessions of childhood. Marie Laure and Werner are never quaint or twee. Instead they are powerful examples of the way average people in trying times must decide daily between morality and survival. --Sara Nelson

Anthony Doerr is the author of the Pulitzer Prize-winning novel All the Light We Cannot See. He is also the author of two story collections Memory Wall and The Shell Collector, the novel About Grace, and the memoir Four Seasons in Rome. He has won four O. Henry Prizes, the Rome Prize, the New York Public Library’s Young Lions Award, the National Magazine Award for fiction, a Guggenheim Fellowship, and the Story Prize. Doerr lives in Boise, Idaho, with his wife and two sons.

1. All the Light We Cannot See: A Novel

2. All the Light We Cannot See

3. All the Light We Cannot See: A Novel

Book Description Hardcover. Condition: New. Dust Jacket Condition: New. Get it in 3 days! We give Fast and reliable 3 day delivery from the US on all orders. Brand New, 100% Money Back Guarantee. Seller Inventory # ABE-14686754612

4. All the Light We Cannot See

5. All the Light We Cannot See

6. All the Light We Cannot See (Hardback or Cased Book)

7. All the Light We Cannot See

8. All the Light We Cannot See

9. All the Light We Cannot See

10. All the Light We Cannot See