Items related to Shatter the Darkness: A Tricia Gleason novel 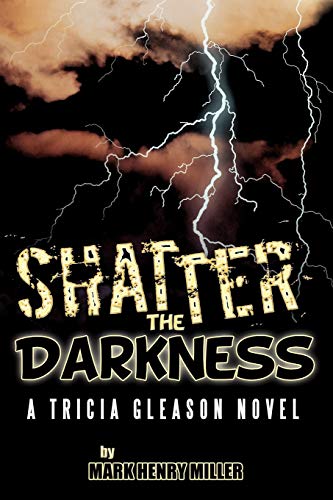 Easy Street, USA. Tricia Gleason figures it originated in Frisco, Colorado. No fuss, no sweat, no worry: the combination for a smooth summer. All set to be a summer intern minister following her first seminary year, she would not be challenged as she was to read Sunday worship scripture, teach church youth to fly-cast and visit hospitals when asked. That changed with one sentence, Tricia, forgot to tell you, but my wife and I are leaving Frisco for the summer; you're in charge". She could only stare. You can't be serious. The minister was. Before she could think or count to ten Tricia is THE SUMMER MINISTER IN FRISCO, COLORADO . . . to preach each Sunday, to coordinate all church activities and handle any "surprise events". She wonders if she and her fly rod will ever have a relationship. The surprises are like fire-crackers exploding. Happens fast . . . a church college student is arrested for armed robbery of a 7/11, is harassed at his university and then disappears. A couple in the church are found, deader than dead according to the county sheriff. Figures it is murder/suicide. Church members rant Tricia only works three hours a week on Sunday mornings-can never find her during the week. The minister comes back earlier than he said, but not to take over. Comes back to defend sexual misconduct charges. And, as Tricia learns, that isn't even a glimpse into other "ways of ministry". The county sheriff and detective ask her help. They know she has solved murders before. She'd rather put on a fishing hat but it doesn't happen enough. Soon discovers no suicide but a double-murder. Tricia has hunches but they are a cul-de-sac, leading in circles. When the who murdered this couple is learned, down deep Tricia isn't sure. And then, the one arrested states, "Do you think I did this by myself? Well, folks, guess again". Tricia thought it was musing about another. She was wrong. So wrong. And, in it all she never finds Eas

Dr. Mark Henry Miller is a retired United Church of Christ local church pastor and Conference Minister. He and his wife, Diane, live in Snoqualmie Ridge, Washington. Born in Portland, Oregon, he graduated from Stanford University, Yale University Divinity School and Eden Theological Seminary. This is the third novel with Tricia Gleason, who has been a Homicide Detective with the Oregon State Police, fishing guide out of Tillamook, Oregon and seminary student in Berkeley, California. In "Shatter the Darkness" she is a summer minister intern in Frisco, Colorado. Thought her detective hat would remain in the closet. It didn't work out that way. Mark and Diane love Colorado fly-fishing, during which ideas for "Shatter" . . . were birthed. Each of Tricia's adventures includes life, ministry, fishing and murder, but seldom in that order. "Shatter" . . . is no exception. All of Mark's books are available on www.Amazon.com. If you wish to know more, contact Mark at www.drmarkhmiller.com or markhmiller@att.net.