Items related to Gay Like Me: One Man's Attempt to Step Into Another'...

Lethermann, Harold Gay Like Me: One Man's Attempt to Step Into Another's Shoes

Gay Like Me: One Man's Attempt to Step Into Another's Shoes 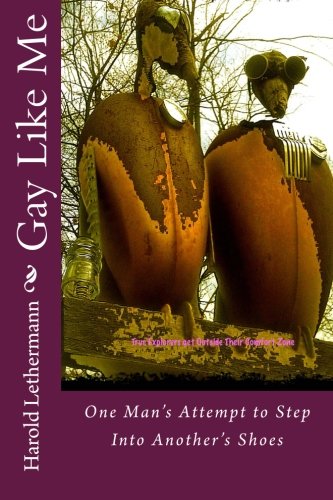 Have you read Black Like Me? Well this aint it! The author was inspired by that well-known work, however, to live a month as a gay man, to understand the experience, the oppression, the bigotry, the homophobia, the stereotyping, and all the other general nastiness faced by this part of society. What he found was some of all those things, but he also encountered people who were helpful, kind, and generous. He also learned a little about himself while on the journey. But before you get teary-eyed, this work is first and foremost funny as hell. Imagine Navin Johnson trying to write a scholarly piece on the troubles faced by gay people, and you have an idea of what's coming. It will make you laugh and make you cry (or at least chuckle and think) as you experience his adventures.

Harold Lethermann Earned an Associates of Arts at North-South-Central College, in Michigan, and went on to complete his BA in Creative Journalism at Podunk University in Ohio. He states he received his MBA direct from the Apple website, which may indicate online courses. He lives with his wife (a very understanding woman), two of their four children (the other two are grown and moved out, and he misses them often), three dogs, three cats, a constantly changing number of rabbits, and probably some mice he doesn’t know about. He lives in the wilds of northern Michigan, not far from “the bridge.”