Items related to Boots on the Ground: Troop Density in Contingency Operations... 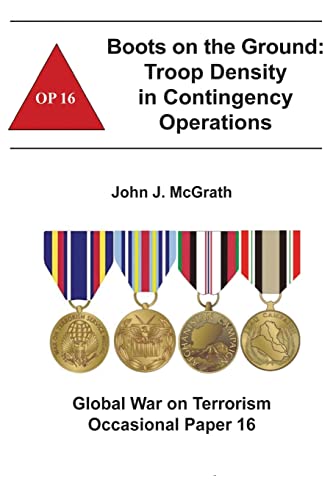 This Global War on Terrorism Occasional Paper (GWOT OP), by Dr. Lawrence Yates, provides his thoughts and analysis of the US Army’s participation in stability operations (SO) since 1789. Dr. Yates, a member of the CSI Team since 1981, has spent twenty plus years intensely studying this aspect of Army operations. Prior to his retirement in 2005, CSI asked him to put in writing his impressions formed by his research in this field. The result is this monograph. Dr. Yates makes several key arguments about the Army’s involvement in SO. Among the key points he makes is his contention that the Army has an institutional habit of forgetting the lesson learned about SO, when, after conducting a stability operation, it returns to conventional warfare preparation. He also point out, correctly, that the Army, which has participated in far more SO-type activities sine 1789 than it has conventional wars, has hitherto retained a mindset that stability operations are an anomaly rather than the norm in American military operations. It is our hope that this GWOT OP will be of great value in providing the military professional with a broad overview of the history of the US Army’s participation in stability operations, and at least one historian’s view on how well it performed. Some may disagree with Dr. Yates’ views on specific aspects of his analysis; that is well and good. If this GWOT OP stimulates a vigorous debate, Dr. Yates’ study will have achieved its purpose.~

Boston native John McGrath has worked for the United States Army in one capacity or another since 1978. A retired Reserve officer, Mr. McGrath served in infantry, field artillery, and logistics units, both on active duty and as a reservist. Before coming to work at the Combat Studies Institute, he worked for four years at the US Army Center of Military History in Washington, DC, as a historian and archivist. Prior to that, Mr. McGrath worked full time for the Unites States Army Reserve in Massachusetts for more than 15 years, both as an active duty reservist and as a civilian military technician. He also served as a mobilized reservist in 1991 in Saudi Arabia with the 22d Support Command during Operation DEERT STORM as the command historian and in 1992 at the US Army Center of Military History as a research and writer. Mr. McGrath is a graduate of Boston College, holds an MA in history from the University of Massachusetts at Boston, and is currently a PhD candidate at Kansas State University. He is the author of numerous articles and military history publications. He has published several books including “Theater Logistics in the Gulf War” published by the Army Materiel Command in 1994, “The Brigade: A History” published by the US Army Combat Studies Institute (CSI) in 2005; and “Crossing the Line of Departure,” also published by CSI in 2006. HE served as the general editor of the published proceedings from CSI’s 20054 Military History Symposium, “An Army at War: Change in the Midst of Conflict.” Aside from a general interest in things military and historical, his areas of particular interest include modern military operations, the German army in World War II, August 1914, and the Union Army in the Civil War. He also has a keen interest in ancient history, historical linguistics, the city of Boston, and baseball.