Items related to The Ongoing Insurgency in Southern Thailand: Trends...

The Ongoing Insurgency in Southern Thailand: Trends in Violence, Counterinsurgency Operations, and the Impact of National Politics: Institute for ... Studies, Strategic Perspectives, No. 6 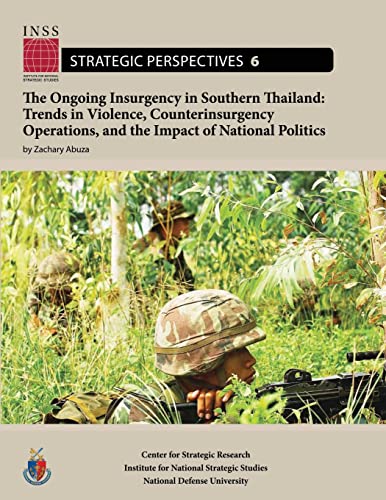 Since January 2004, a Malay-Muslim–based insurgency has engulfed the three southernmost provinces in Thailand. More than 4,500 people have been killed and over 9,000 wounded, making it the most lethal conflict in Southeast Asia. Now in its 8th year, the insurgency has settled into a low-level stalemate. Violence is down significantly from its mid-2007 peak, but it has been steadily climbing since 2008. On average, 32 people are being killed and 58 wounded every month. Most casualties are from drive-by shootings, but there are also about 12 improvised explosive device (IED) attacks a month. The insurgency is now characterized by less indiscriminate violence and more retaliatory attacks. Insurgents continue to target security forces, government officials, and Muslim moderates who seek accommodation with the Thai state as part of efforts to make the region ungovernable by limiting provision of social services and driving Buddhists from the south. The overall level of violence may be influenced more by insurgent calculations about the optimum amount of violence needed to advance their political goals than by improved capabilities of the security forces. Despite better coordination, Thai counterinsurgency operations are still hampered by bureaucratic infighting and a lack of professionalism. Human rights abuses by security services with blanket immunity under the Emergency Decree continue to instill mistrust among the local population. Moreover, as long as violence is contained in the deep south, the insurgency will remain a low priority for the new Thai government, which is focused on national political disputes and is reluctant to take on the military by pursuing more conciliatory policies toward the south. Indeed, even under the 30-month tenure of the Democrat Party with an electoral base in the south, the insurgency was a very low priority and its few policy initiatives were insufficient to quell the violence. The new Pheu Thai government under Prime Minister Yingluck Shinawatra, the younger sister of Thaksin Shinawatra, who was ousted in a September 2006 coup, will have its hands tied in the south. Its election victory and focus on national reconciliation have already engendered mistrust of the Thai military. The new government will be reluctant to criticize the military’s handling of the insurgency, take on the culture of impunity, or push for any form of political autonomy. This will make any devolution of political authority unlikely, limiting chances for a negotiated solution. As a result, low level violence is likely to continue indefinitely. The most important immediate U.S. objective in Thailand is political stability at the national level and deepening bilateral economic ties. Absent a cohesive Thai government with the political will to overcome military resistance to policies that might address underlying causes of the insurgency, U.S. pressure to do more is likely to be ineffective or even counterproductive. Accordingly, the United States should maintain quiet diplomatic pressure on the government to broaden its counterinsurgency efforts and offer any requested intelligence and law enforcement assistance, while being cognizant of Thai sensitivity over its sovereignty.

1. The Ongoing Insurgency in Southern Thailand: Trends in Violence, Counterinsurgency Operations, and the Impact of National Politics: Institute for Nati

2. The Ongoing Insurgency in Southern Thailand: Trends in Violence, Counterinsurgency Operations, and the Impact of National Politics: Institute for Nati