Items related to Mistress of the Waves

Phillies, George Mistress of the Waves

Mistress of the Waves 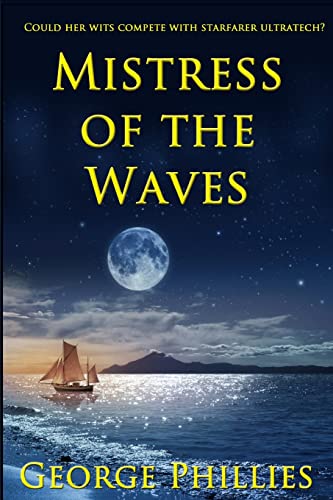 Orphaned Amanda Kirasdotr is a sailor on the lost planet Goddard. When she rescues a visiting starfarer from drowning, her reward is a trip into orbit. Now she wants to go there again, not easy when the hottest ship on Goddard has three masts and a full set of sails.The shadowy Brotherhood of the Bell realizes that Amanda wants to bring that most dreaded of all menaces, change, to Goddard. They'll do absolutely anything to stop her.Amanda begins with her wits, her determination, and her dory Northstar. She's up against typhoons, pirates, assassins, financial bubbles, starfarer ultratech, and the mythical giant ship-eating squid. Can she beat them all to find the path to her dream?

George Phillies is a writer and physics professor at the Worcester Polytechnic Institute. His published books include science fiction, political history and philosophy, and textbooks on polymer physics, statistical mechanics, and game design. (Last year he taught from all three textbook topics at the same time). In 2008, he was the Libertarian Party of New Hampshire's candidate for President of the United States. Books by George Phillies include: Fiction The Minutegirls This Shining Sea Nine Gees The One World (forthcoming) Game Design Contemporary Perspectives in Game Design (with Tom Vasel) Design Elements of Contemporary Strategy Games (with Tom Vasel) Politics Stand Up for Liberty! Funding Liberty Physics Elementary Lectures in Statistical Mechanics Phenomenology of Polymer Solution Dynamics Complete Tables for 'Phenomenology of Polymer Solution Dynamics'

1. Mistress of the Waves

2. Mistress of the Waves