Items related to The Auction Horse 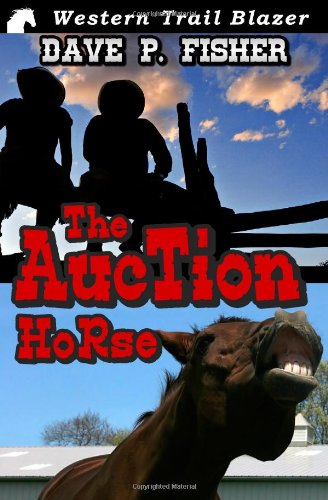 Cowboy Comedy at its best... Take Jack, a crusty old cowboy with a wry sense of humor, and pair him with Cleve, not the brightest crayon in the box but always has an idea to make them rich. Put them on a hard scrabble ranch in Winnemucca, Nevada, called the Plenty-o-Rocks. Mix in a cast of characters like Big Billy Bear, Stubb, and neighbor Slim Johnson and you have The Auction Horse. Follow Jack and Cleve through their misadventures: Jack's near death by killer bull in Buttercup; snowed in with windbag Slim in Snow Bound; Cleve’s attempt to be a cowboy singer in Cowboy Cleve; hear Jack’s spin on Romeo and Juliet in Shakespeare; and learn all about Cleve’s champion cutting horse in the title story The Auction Horse. These tales and many more will keep you wondering how these guys ever lived as long as they have.

Dave P. Fisher is a writer of western novels, western short stories, and outdoor non-fiction articles with over 400 works published. He won the Will Rogers Medallion Award for Western Fiction for his short story collection Bronc Buster – Short Stories of the American West. He has also collected 8 Reader's Choice Awards for short stories, and has been included in 11 anthologies. He is the author of the trilogy The Poudre Canyon Saga, Bitter Grass and its sequel A Man for the Country. The other side of Dave is his sense of comedy having been a stand up Cowboy Poet and Humorist writing his own brand of poetry and stories about the west and its people. His CD, Snakebit, is a collection of humorous cowboy poetry set to music and sound. In addition to this he was a member of a Reno based comedy improv group. The Jack and Cleve stories are based on Dave's experiences as a lifetime westerner, working cowboy, bronc rider, horsepacker, and hunting guide. Here he has spun together the personalities and characters of people he has known and worked with. As he puts it, "I have known people just like these." He also admits that Jack is modeled mostly after himself, a curmudgeon in a cowboy hat. More can be learned about Dave at: www.davepfisher.com