Items related to The Merchant and the Menace: Book I of The Seraphinium

McHugh, Daniel F. The Merchant and the Menace: Book I of The Seraphinium

The Merchant and the Menace: Book I of The Seraphinium 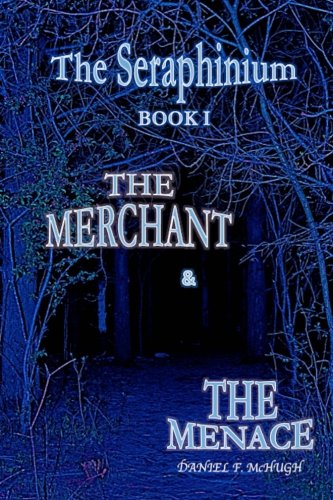 The Seraphim. Beings of power, created to guide the world in times of trouble. They live their lives of near immortality in servitude to a lesser creature, man.

One rebelled. Amird, the Hand of the Creator, bridled at the sovereignty of his lord. In defiance he murdered a brother and was cast into the Mists of Chaos.

Millennia passed as the Deceiver plotted his return. Backed by the might of a seemingly unstoppable army of Ulrog Stone Men and their fire-eyed Malveel Lords, Amird plans to wrest control of the world from the Creator and rain violence on the humans he once served.

All that stands between Amird and his triumphant return are the remnants of battered human armies and the hope that Seraphim, loyal to the Creator, still roam this world.

Kael knows little of this struggle. His quiet village lies deep in the Southlands, unchanged and unchallenged by the wars raging in the frozen North. In fact, the boy longs for a bit of adventure and freedom from the boring routine at his father’s inn.

Freedom comes at a cost. Kael’s first journey outside his secluded village results in a tragedy so deep it destroys the boy’s sheltered world and immerses him in the struggle.

Revelations surface. Kael uncovers a past linking him to legends, grapples with a present that resembles nothing he knows, and confronts a future that demands he tap long dormant power to stake a claim in the defense of the human races.

Kael’s first step toward that future lies through the darkness of the Nagur Wood, and rumor has it something prowls the Nagur!

In the Spring of 1987 I woke one morning from the most vivid dream I ever experienced. I lie in bed basking in the pleasure of it. The sense was very much like the feeling you experience after watching a particularly excellent movie. You sit in your theater seat as the credits roll, lost in the story, letting emotions continue to wash across your consciousness.
That morning was the genesis of The Seraphinium. What I experienced was a full blown movie in my head. As I "watched" that movie, the story was complete. Characters were set. Background for those characters was known. When a scene played out, I never asked "Who is that guy?" It was as if I already knew. I had been briefed. The story wasn't simple. On the contrary, it was quite complex. A world acted as its canvas and an entire population as its cast of characters. The story encompassed years and dealt with the future of entire races. I sat up and went to my desk. I wrote. Hasty notes at first, scribbled all across a yellow legal pad. The notes turned into an outline and the outline was stapled to crude drawings of maps and creatures. For the next decade and a half I would periodically breakout the notebook. It grew. After a few years it turned into a box crammed with poems, prose, drawings, photos, maps and outlines. The box became a blessing. I truly enjoyed cracking it open and touching base with the ideas that had grown so familiar to me. I knew the story in both depth and detail within my head, but looking at it on paper was always a treat. However, the box also became my albatross. I took it with me when I moved, always stuffing it in some dark closet. It represented something undone. It made me feel as if I'd left a part of my life incomplete. The Book, as I began to call it, needed to be written. In 2004, my wife Jennifer gave me two gifts for Christmas. I unwrapped the first, a laptop computer. I was puzzled. I didn't need or ask for a laptop. The second was a colorfully wrapped, large box. I opened it and was even more confused. Before me lie The Box, retrieved from its dark recess. "Take all of this," said Jennifer as she pointed at The Box, "and put it in that." She pointed at the computer. So for 7 years I have been putting "this" into "that". The result is The Seraphinium Series.

The story follows the life of Kael, a young man from the Southlands of the Nearing World. When Kael and his brother Aemmon decide to embark on a trade mission for their father's inn, tragedy and intrigue result. Aemmon is injured during a freak storm and camps within the edge of the Nagur Wood. Kael attempts to journey on, but a masked figure first stalks then pursues him through the dark wood. Kael nearly evades the pursuit but the Efer River acts as a snare and leads to his capture. The Grey Elves of the Nagur Wood accuse the young man of being part of a series of deaths in their kingdom. Kael tumbles head over heals into the fear swirling through the Elven Kingdom.

The appearance of Ader, a traveling merchant, and his silent son Manfir calms the Elves. The old man wields influence over the secretive people. Ader vouches for Kael and agrees to escort the young man back home. The trio travel back through the Nagur Wood and discover a scene of carnage. A Grey Elf troop lies massacred across the Nagur Path. As Ader inspects the battle scene, Kael becomes aware of a presence in the wood. A Malveel hunter, a beast of fang and claw, steps from the dark wood gripping the lifeless body of Aemmon in its jaws.

The Malveel seeks the new Seraph and senses its power. Ader steps forward and the creature recognizes the old man. The resulting battle reveals more about Kael than either of the initial participants. Their escape from the Malveel and the death of Aemmon sets in motion a pair of needs. Kael desires nothing more than to return to his father and share his grief with family. All thoughts of adventure and exploring the wider world are gone. The young man wishes to return to his home and somehow piece his normal life back together.

Ader, on the other hand, recognizes the fundamental shift in world events. The Malveel have finally discovered their prey. Kael's carefully crafted anonymity vanishes. Amird the Deceiver and his servants now possess a name and a face to attach to the "New Seraph." The fiction of Kael's early life can never return. Ader must teach the lad who he is and the new Seraph must accept the power he always sensed boiling beneath his consciousness.

The desires of Kael and Ader stand at odds, but greater forces will launch them both on a quest of discovery. Battle rages in the frozen North. Those soldiers who infiltrated Kael's village in order to guard the lad must set aside the roles they played and return to duty. The king is desperate for bodies to fill the front lines and Kael's father, Brelg, joins the march north. Ader's pledge to return Kael to his father compels them both toward the struggle, a struggle that will also compel the boy to decide what role he will play in the conflict to come.