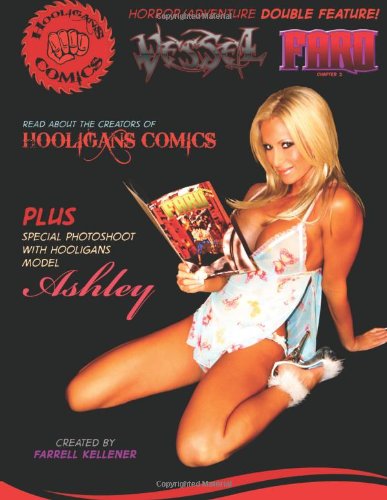 Playboy meets Wizard as Hooligans Comics presents a double feature complete with a layout of our Hooligans girl Ashley, VESSEL Colonoscopy via machete, crucification with railroad spikes, and a human hood ornament. Hooligans Comics presents VESSEL, the ultimate slasher story from the mind of Dominick and JP Muzio. Deep in the sweltering California valley, Jim Vessel drinks his life away while trying to erase the memory of his wife?s horrific death. Fate intervenes when a young girl, trying to escape four teenage rapists, seeks help from the tortured soul. Vessel is overpowered and tossed onto the tracks; the electric charges from the lightning hitting the rails connect him briefly with the girl before he is mauled by the oncoming train. The girl wakes up in a hospital room barely alive and bombarded by the voices of dead souls longing to be avenged of their wrongful deaths. Meanwhile, Vessel rises from the dead, his size and appearance greatly altered. Psychically linked to the young girl, he believes he?s being guided by his resurrected wife. Dishing out violent means of horrific justice, the avengers of the undead are pursued by trigger-happy local law enforcement. FARO Chapter 2 The quest to prevent the Lincoln assassination continues as Faro must recover from his wounds and find the sultry Majesty, who has replaced him with Muzio the Mauler. Meanwhile, as New York burns to the ground during the infamous Draft Riots, politicians, profiteers and prostitutes throw a grand party on Majesty's rooftop to witness the chaos.

Farrell K is a former radio host and the owner and creator of Hooligans Comics. Originally from New York, he currently resides in Parts Unknown with nothing but his lovably loyal bulldog Baby by his side.