Items related to And The Books Were Opened: "God's Three Books"

Ross, Barry And The Books Were Opened: "God's Three Books"

And The Books Were Opened: "God's Three Books" 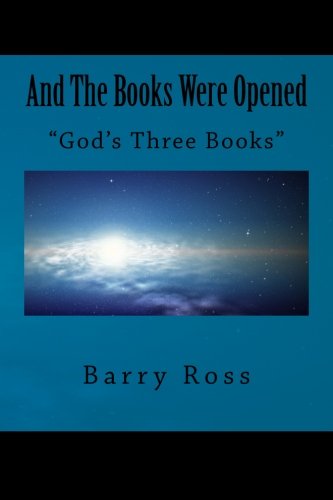 Apostle John is banished on the island of Patmos for the Word of God and for the testimony of Jesus Christ. John is given a revelation as he was in the Spirit on the Lords day. In this vision John saw into a future time to the day of the Lord. The vision John received was of things which must shortly come to pass! John according to Revelation-20:11-15 saw the Great White Throne Judgment. "And I saw the dead, small and great, stand before God: and the books were opened, and another book was opened, which is the book of life: and the dead were judged out of those things which were written in the books, according to their works (Rev-20:12)." This judgment takes place after the thousand year millennium; it is the second resurrection of the dead. This book reveal the other books that are not mentioned in Revelation-20:12. Most know and have heard constantly of the Book Of Life; but of these other books most do not know exist. Each of these books are very significant and the knowledge of them should be made known. God has inspired me to reveal this knowledge in this work! All that take part in the first resurrection, will not stand in this judgment neither will the second death have any power over them as they shall be priest of God and of Christ and shall reign with him a thousand years! These will stand however before the Judgment Seat of Christ (Bema) to receive their rewards. They are saved by grace through faith in Jesus Christ but they are rewarded by their works and given a crown of righteousness at his coming! My friends, you do not want to miss out on the first resurrection for these are blessed and holy that have part in the first resurrection and will rule with the Lord in God's kingdom here on this earth. God's divine anger is kindled against all those that do not believe in the name of his only begotten Son and God's divine anger will be manifest at the Great white Throne Judgment of which is the Final judgment of Almighty God! You need to know what each of these books are and be sure that you, my friend will have no doubt as to where you are with God and Christ Jesus the Lord. This book is filled with power and knowledge you will be blessed and thankful to God to have revealed it to me, as your very soul is at stake! Get your blessing today and find out what these "Books" are, and the essence of each! John said,"And The Books Were Opened" and another book was opened, which is the Book of Life!" God has three books that will be opened at the white throne Judgment and those that stand in that judgment will according to the revelation of the apostle John; will be judged by those things that are written therein! By the time that this Great white Throne Judgment take place the people of God will have been resurrected a thousand years prior and will have received immortality and would have ruled here on this earth with Christ Jesus for that thousand year period of time even until this time that the "Rest of the Dead" will rise to stand in Judgment and receive their just reward; which according to the apostle John's vision will be the "Lake of Fire" which is the "Second Death" and my friends the literal Bible's "Hell." everyone whose names are not found written in the "Book Of Life" will be cast into this lake of fire which will originate at the very throne of God. Daniel saw in his vision and wrote: "I beheld until the thrones were cast down, and the Anicient of days did sit, whose garments were white as snow, and the hair of his head was like the pure wool: his throne was like the fiery flame, and his wheels as burning fire. A fiery stream (Lake of Fire) issued and came forth from before him; thousand thousands ministered unto him, and ten thousand times ten thousand stood before him: the Judgment was set "And The Books Were Opened." I saw in th night visions, and behold, one like the son of man came with the clouds of heaven, and came to the Ancient of days, and they brought him near before him (Revelation-7:9,10,13 KJV)."

Barry Ross have studied the Word of God for over twenty-six years. He received his Ministerial License in 1989. Deciding to step out of the ministry to pursue other interest (such as writing), he continued in his studies and in applying the Christian principles in his own personal life. He understand the true struggles of the Christian's faith in this present evil world. Barry Ross strive to "keep himself" in the love of God and to do unto others as he would have them do unto him. He believe that every sincere Christian has the obligation to share the gospel of God and to always be ready to give an answer of their hope that is in Christ. Barry Ross believes that Jesus Christ came into the world to die for the sins of humanity, and that Christ Jesus accomplished that mission on the cross at Calvary. He believes that Christ Jesus was buried, in a grave and was there for three days and three nights and on the third day, early in the morning hour; God raised Jesus from the dead and after being saw of his disciples was then ascended into the highest heaven; where he now sit at the right hand of God and makes intersession for the people of God. Jesus Christ will one day soon return to this earth with all power and great glory as King of kings and Lord of lords; and at his coming, the dead in Christ shall rise first and those that are alive and remain shall be changed in a moment in the twinkling of and eye and she be "caught up" togather with them in the clouds, to meet the Lord in the air: and so shall we ever be with the Lord. Barry Ross sincerely believe in a life changing, merciful, God; and that, as God have had mercy on him throughout his entire life time, he should have mercy on others!