Items related to Survival of the Unfittest: The Undead Diaries Series...

Survival of the Unfittest: The Undead Diaries Series (Volume 1) 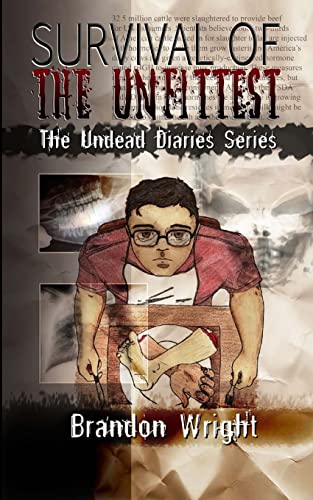 When a paralegal named Jacob becomes violently ill after a business trip to New York. He quickly finds that he contracted a virus that mutates his DNA to only allow him to eat raw meats. It's not too bad until the meat industry is on it's knees from lack of meat, and Jacob runs out. He finds himself having vivid dreams of attacking people, and eating them like an animal. When he wakes up, he finds out the dream wasn't just a dream. This recollection of Jacob's journey to survive will guide you through the adventures, and mis-adventures of Jacob's survival. Constantly on the run from a Anti-Mutation group called The Control Group, and fighting his inner-demons to not kill, but knowing to survive he must be willing to do anything. All goes well until his city runs out of meat, and all the butchers are closing shop. He starts to go hungry, and starts having these vivid dreams about attacking people, and eating their flesh and muscle. His supervisor has also contracted the mutation, and eyes one of the new girls as someone he may be interested in. Jacob has to find a balance between survival and compassion towards other humans. How will he survive as a anti-zombie group gives chase after him, and his infected friends?

"Great book, it started out quick and the pacing kept up from there, which is great because if a book, even an excellent one, has slow pacing I have trouble reading it. The characters were easy to identify with and empathize with." -- Justin, from GoodReads.com

1. Survival of the Unfittest: The Undead Diaries Series