Items related to Puck Off! 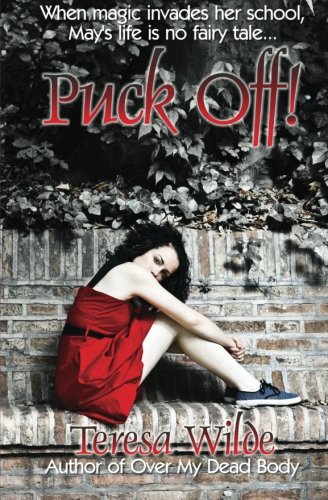 Sixteen-year-old May Greenwood's life is like anyone else's--hanging out with her best friend Tania, propping up the ego of her famous comic book artist dad, avoiding the man-eating plants growing in the gym--the usual. But she can't shake the feeling that something's not quite right with the world.

Everything changes the day her massive crush, football team vice captain, Mac Ramsay, kisses her and, out of nowhere, declares his eternal love. Is Ramsay's devotion a ploy to get back at Tania for breaking up with school golden boy Ron "The Bear" Ober? But May's world takes a turn for the strange when a mysterious transfer student that Ramsay's in love with her because of a magic spell. Ron and Tania are really the King and Queen of the fairies, straight out of Shakespeare's A Midsummer Night's Dream, and have come to the mortal realm because they're at war. Over May. Now May, with the help of the love-struck Ramsay, is the only one who can restore order to the fairy courts before her entire school is destroyed in the crossfire.