Items related to Without a Summer (Glamourist Histories)

Without a Summer (Glamourist Histories) 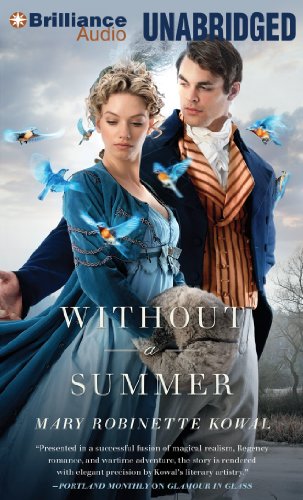 Up-and-coming fantasist Mary Robinette Kowal enchanted fans with her novels Shades of Milk and Honey and Glamour in Glass, which introduced Regency glamourists Jane and David Vincent. In Without a Summer, Jane and Vincent take a break from their international travels. But in a world where magic is real, nothing—even the domestic sphere—is quite what it seems.

After a dramatic trip to Belgium, Jane and Vincent go to Long Parkmeade to spend time with Jane’s family, but quickly turn restless. The spring is unseasonably cold, and no one wants to be outside. Mr. Ellsworth is concerned about the harvest, since a poor one may imperil Melody’s dowry. And Melody has concerns of her own, given the inadequate selection of local eligible bachelors.

When Jane and Vincent receive a commission from a prominent London family, they take it, and bring Melody with them. They hope the change of scenery will do her good, and her marriage prospects—and mood—will be brighter in London. Talk here frequently turns to increased unemployment of coldmongers and riots in nearby villages by Luddites concerned that their way of life is becoming untenable. With each passing day, it’s more difficult to avoid getting embroiled in the intrigue, which does not really help Melody’s chances for romance. It doesn’t take long for Jane and Vincent to realize that in addition to arranging a wedding, they must take on one small task: solving a crisis of national proportions.

Mary Robinette Kowal was the 2008 recipient of the John W. Campbell Award for Best New Writer and a Hugo winner for her story “For Want of a Nail.” Her first two novels, Shades of Milk and Honey and Glamour in Glass, began the Glamourist Histories, which Without a Summer continues. She served two terms as the vice president of Science Fiction and Fantasy Writers of America. A professional puppeteer and voice actor, she lives in Chicago with her husband, Rob, and more than a dozen manual typewriters.