Items related to How Do You Kill 11 Million People?

Andy Andrews How Do You Kill 11 Million People?

How Do You Kill 11 Million People? 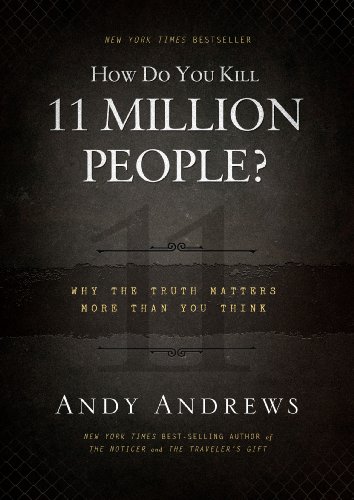 Or, to be precise, 11,283,000 people. Andy Andrews believes that good answers come only from asking the right questions. Through the powerful, provocative question, “How do you kill eleven million people?” — the number of people killed by the Nazi German regime between 1933 and 1945 — he explores a number of other questions relevant to our lives today: Does it matter that millions of ordinary citizens have checked out of participating in the decisions that shape the future of our country? Which is more dangerous: politicians with ill intent, or the too-trusting population that allows such people to lead them? How are we supposed to tell the difference between the “good guys” and the “bad guys”? How does the answer to this question affect not only our country but our families, our faith, and our values? What happens to a society in which truth is absent? Andrews issues a wake-up call: become informed, passionate citizens who demand honesty and integrity from our leaders, or suffer the consequences of our own ignorance and apathy. Furthermore, we can no longer measure a leader’s worth by the yardsticks provided by the left or the right. Instead, we must use an unchanging standard: the pure, unvarnished truth.

"Several years ago I asked myself three questions: Where do we begin to find common ground in regard to what we want (or don't want) for the future of America? Is it possible to write something that doesn't use the words Republican or Democrat, liberal or conservative, yet conveys a message with which everyone could agree? Can it be written in a concise fashion allowing anyone to read it, clearly understand the message, and be empowered in less than fifteen minutes?Here, then, is my answer to those questions."- Andy Andrews

Hailed by a New York Times reporter as “someone who has quietly become one of the most influential people in America,” Andy Andrews is a bestselling novelist and in-demand speaker for the world’s largest organizations. He has spoken at the request of four different United States presidents and at military bases worldwide. Zig Ziglar said, “Andy Andrews is the best speaker I have ever seen.” Andy is the author of the New York Times bestsellers The Noticer and The Traveler’s Gift. He lives in Orange Beach, Alabama, with his wife, Polly, and their two sons.