Items related to The Book of Gates: The Mardukite Rites & Rituals...

The Book of Gates: The Mardukite Rites & Rituals of Anunnaki Stargates 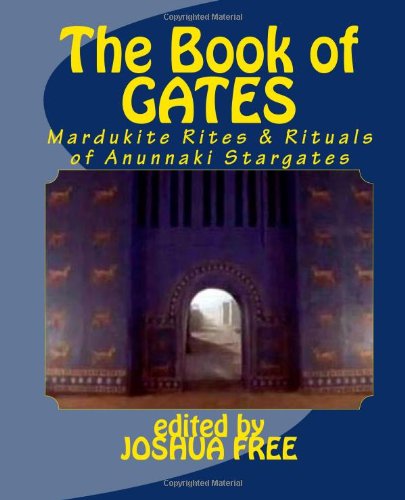 The 'Book of Gates' was first released as the third stand-alone title in the original 2009 Mardukite 'Necronomicon' cycle as "Necronomicon Gatekeepers Grimoire" (Liber-G) or in later editions as the "Anunnaki Gatekeeper's Grimioire." At the end of 2009, the complete series was compiled to formulate the most famous and widely distributed of our materials to the surface world, the Liber-N+L+G+9 anthology "Necronomicon Anunnaki Bible." The "Book of Gates" (Liber-G) has always been used as a preliminary primer in practical 'mysticism' and 'occult experimentation' within the Mardukite-Babylonian Anunnaki paradigm and now, four years since its release from the underground, it remains uniquely popular and deserving of its own esteemed 'ceremonial' edition to close the 2012 FULL COLOR ceremonial edition "Mardukite Magick" trilogy including "The Book of Marduk" and "The Book of Zagmuk." Edition Note: The 'Book of Gates' is a full color abridged ceremonial edition of materials published in 2009 as the 'Necronomicon Gatekeepers Grimoire' (Liber-G) also appearing in the 2012 nostalgia edition Liber-G and the complete Mardukite Year-1 anthology, 'Necronomicon Anunnaki Bible', now available in the 2012 revised and expanded 5th edition.

Joshua Free first began by receiving personal apprenticeships from his early years and progressing through his entire life, including various Christian Gnostics, Rosicrucians, Freemasons, members of the Hermetic Order of the Golden Dawn, O.T.O. Ordo Templi Orientis, A.A. Argentium Astrum among others. He was officially initiated into the Pheryllt Druid tradition at the age of 12 and began leading his own Gnostic Druid organization at 13. Joshua Free is the founder of Mardukite Ministries (2008) and the prolific author of many works including Sumerian Religion, Babylonian Myth & Magic, The Sorcerer's Handbook of Merlyn Stone, The Necronomicon Anunnaki Bible, and many others. In the 1990's he was the youngest initiate of the Order of Bards, Ovates and Druids in England until he left to independently pursue the origins of the Celtic Druids - resulting in the "Book of Elven-Faerie". Although best known for his work on Sumerians, the Anunnaki and Babylonian Tradition for the "Mardukites", his work on the Dragon Legacy and modern Pheryllt Druid tradition is also paramount. His writing has even been used in the third volume from Douglas Monroe, "The Deepteachings of Merlyn" (published 2011).