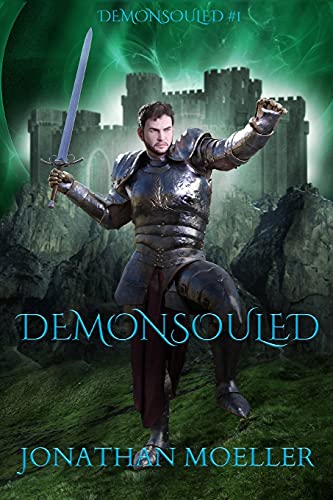 For fans of Robert E. Howard, David Gemmell, and Raymond E. Feist, here is a new story of sword and sorcery. Banished for fifteen years, the wandering knight Mazael Cravenlock returns home at last to the Grim Marches, only to find war and chaos. His brother plans a foolish and doomed rebellion. His sister hopes to wed a brutal and cruel knight. The whispers speak of living corpses that stalk the night, of demons that lurk in darkness, and a sinister snake-cult that waits in the shadows. Yet Mazael's darkest enemy waits elsewhere. Within his own tainted soul... PRAISE FOR DEMONSOULED: “...action-packed, fast-moving tale...a solid debut novel...” -Fantasy Book Spot “a gripping account of one man’s battle against both inner and external demons, and I would recommend it to anyone who desires an action-packed story riddled with twists . . . ” -Sffworld.com “Jonathan Moeller has written an epic fantasy in its classic form that all lovers of fantasy will embrace.” -Love Romances “Jonathan Moeller will definitely capture the attention of many with DEMONSOULED, a suspenseful fantasy novel that is not to be missed.” -Romance Reviews Today “Here’s a fantasy adventure with plenty of thrills and chills. After a gap of many years, a hardy warrior and his companions return to their homeland. One of them discovers that his sister has been kidnapped and that his brother is plotting an ill advised rebellion against a less than sterling local ruler. Throw in some malevolent magic including a small army of reanimated corpses, a secretive plot, lots of derring do, a sinister mystery, and a magical assault that threatens to turn our hero into an instrument of evil. Exciting, occasionally surprising, with readable prose and a diverse set of characters. What more could you ask?” -Don D’ammassa

Standing over six feet tall, Jonathan Moeller has the piercing blue eyes of a Conan of Cimmeria, the bronze-colored hair a Visigothic warrior-king, and the stern visage of a captain of men, none of which are useful in his career as a computer repairman, alas. He has written the DEMONSOULED series of sword-and-sorcery novels, the TOWER OF ENDLESS WORLDS urban fantasy series, THE GHOSTS series about assassin and spy Caina Amalas, the COMPUTER BEGINNER'S GUIDE sequence of computer books, and numerous other works. Visit his website at: http://www.jonathanmoeller.com

"From a darkly humorous tale of the power of words (Death and the Librarian) to a never-before-published response to events of September 11 (Ilion), Friesner's 12 stories illustrate the author's acutely sensitive vision of wonder in the everyday world... Known primarily for his 'Star Wars' novels... Zahn's short stories also deliver strong plots and memorable characters... Zebrowski's many novels (e.g. Macrolife) mark him as a visionary as well as a master of hard sf. The ten short stories collected in In the Distance provide a benchmark of his creativity... the author expands his concept of the human condition to embrace the stars. Part of Five Star's continuing commitment to showcasing the short fiction of the genre's most prominent author's, these three volumes belong in most libraries where short sf is popular."
-- Library Journal (December 2002) (Library Journal 20021201)

"The chapters which led into the ending were exciting as events which had been prepared for during the course of the book finally begun to occur and I found it easy to become immersed in the world. The author managed to bring many different threads together in a skillful manner while retaining an element of mystery and providing the reader with surprise revelations. . . I enjoyed this book and the emotions it provoked in me. . . a gripping account of one man's battle against both inner and external demons, and I would recommend it to anyone who desires an action-packed story riddled with twists."
--Sffworld.com, July 2005 (Doody Enterprises 20050701)

"Will appeal to a segment of fans that happen to be the most numerous in number in the genre; it?s a straightforward, linear, rather action-packed, fast moving tale of a warrior struggling with himself, waving his magic sword around, with his numerous companions in tow. . .A solid debut novel of an author whose progress I?d really like to see in a following work."
--Fantasybookspot.com, June 2005 (Doody Enterprises 20050601)

"This is Jonathan Moeller?s debut book and he started his writing career within the world of the role playing game. This reviewer can hope that this will not be his last work as there are certainly great things to be expected from Mr. Moeller."

"Demonsouled is a story on the level of any well know fantasy epic writer. Rich in description, full of feelings, sights and sounds, Mr. Moeller has built a believable world similar to a Medieval. The reader will find all elements of a fantasy, knights on horses, Lords and ladies, wizards good and bad, zombie like creatures, elf like creatures and magic abounding the pages. There is even a magic sword and we mustn't forget the demons, who are a very important part of this story."

"Mazael is a true knight in not so shiny armor, who protects the weak and fights for truth while struggling to overcome the darker side of his soul. At first, the reader may be disturbed by his violent thoughts, which thankfully don't match his actions and as the plot unfolds, all is revealed."

"The plot is exciting with never a dull moment. There are also a few sub-plots cleverly written into the story and all tie up nicely in the end. A bevy of secondary characters add color and diversity to the story. We also cannot forget the villains, from the truly villainous to the sadly delusional. All are very well written and important to the story. Jonathan Moeller has written an epic fantasy in its classic form that all lovers of fantasy will embrace. A new star is rising and this reviewer looks forward to more stories from Mr. Moeller?s pen."
--Loveromances.com, June 2005 (LoveRomances.Com 20050601)

"Once all the key players are introduced, then DEMONSOULED by Jonathan Moeller is a gripping fantasy novel full of sorcery and treachery. Uncertainty as to each character's loyalty is a key part of what makes this such a good book, and it isn't until absolutely necessary that their true natures are revealed. Although the actual writing is a bit choppy in places, Mr. Moeller makes up for that with a mystical realm that houses the living dead and snake gods. Mazael is truly a man divided, and his indecision over who to believe and how to do what is right plagues him until a climactic showdown near the end of the book."