Items related to We Are the Dinosaurs

Berkner, Laurie We Are the Dinosaurs

We Are the Dinosaurs 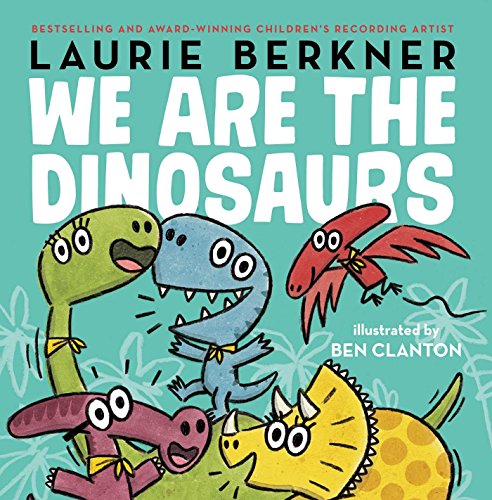 Laurie Berkner, “the queen of children’s music,” (People) pairs the lyrics of her beloved hit with Ben Clanton’s whimsical illustrations in this winning, adorable picture book—a must-have for fans of Laurie, dinosaurs, and all things cute.

Laurie Berkner’s chart-topping, beloved hit “We Are the Dinosaurs” is now a picture book! Featuring an adorable cast of characters and vibrant, playful art by Ben Clanton, We Are the Dinosaurs transports readers back in time to when the dinosaurs roamed the earth.

WHADDAYA THINK OF THAT?

Recognized as “the queen of children’s music” (People), Laurie Berkner is a singer, songwriter, lyricist, author, and founder of Two Tomatoes Records. She has released twelve bestselling, award-winning albums, was the first recording artist ever to perform in music videos on Nick Jr., and appeared regularly on the network’s Jack’s Big Music Show. Laurie helped develop the short-form animated series, Sing It, Laurie!, on the twenty-four-hour preschool television channel Sprout, and has written music and lyrics for three Off-Broadway children’s musicals. A project close to her heart has been designing the curriculum and training teachers for Laurie Berkner’s The Music in Me, an early childhood music program based on her music and classroom philosophy. Learn more at LaurieBerkner.com.

Ben Clanton is an author and illustrator whose books include It Came in the Mail; Something Extraordinary; Rex Wrecks It!; Mo’s Mustache; The Table Sets Itself; Vote for Me!; Rot, the Cutest in the World; and Rot, the Bravest in the World. He lives with his wife and son in Seattle, Washington. Learn more at BenClanton.com.

"Popular children’s musician Berkner (The Story of My Feelings) brings another of her songs to the picture book crowd with this vibrant adaptation. Berkner’s lyrics provide a rowdy framework for the story—“We are the dinosaurs,/ marching, marching./ We are the dinosaurs—/ whaddaya think of that?”—and Clanton’s (Narwhal: Unicorn of the Sea) zippy cartoons create a parallel visual adventure that brings Berkner’s words to life.... Berkner’s fans and newcomers alike should find much to enjoy about in these boisterous, independent-minded dinosaurs’ adventure." Source: Publishers Weekly, January 2017

"The lyrics to Berkner's 1997 dinosaur marching song are kitted out with a plotline, dialogue, additional sound effects, and big, very simply drawn prehistoric scenes...young audiences will have no trouble chiming in as they march about and roar in chorus." Source: Booklist, March 2017

"The marching rhythm of Berkner’s hit tune comes through in this playful picture book adaptation. The simple, repetitive lyrics...are transformed through brilliant illustrations by Clanton into a story about a troop of young dinosaurs going on an explorative adventure...with a big dose of Clanton’s bold and adorable style. He includes just the right touch of anthropomorphism and accessories to give each dinosaur and parent unique personalities without making the book over-the-top...this title will be read over and over. VERDICT: A catchy narrative that will stick in readers’ heads. A great purchase for most picture book collections, and a fun choice for preschool storytimes." Source: School Library Journal, April 2017

1. We Are the Dinosaurs

2. We Are The Dinosaurs

3. We Are the Dinosaurs

4. We Are the Dinosaurs (Hardback or Cased Book)

5. We Are the Dinosaurs

6. We Are the Dinosaurs

7. We Are the Dinosaurs

8. We Are the Dinosaurs

9. We Are the Dinosaurs Format: Hardcover

10. We Are the Dinosaurs