Items related to Unlikely Warrior: A Jewish Soldier in Hitler's... 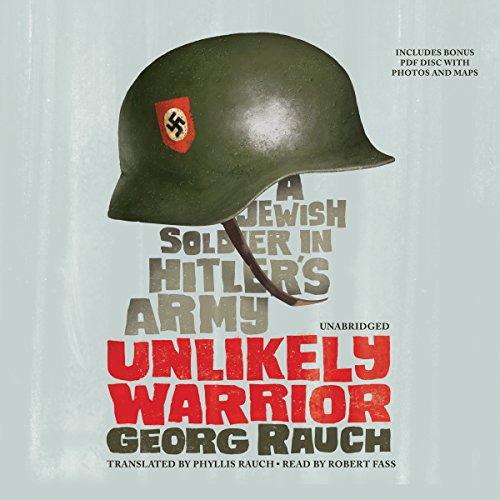 An astounding memoir about a Jewish teenager forced to become a German soldier.

As a young adult in wartime Vienna, Georg Rauch helped his mother hide dozens of Jews from the Nazis behind false walls in their top-floor apartment and arrange for their safe transport out of the country. His family was among the few who worked underground to resist Nazi rule. Then came the day he was shipped out to fight on the Eastern front as part of the German infantry - in spite of his having confessed his own Jewish ancestry. Thus begins the incredible journey of a young man thrust unwillingly into an unjust war, who must use his smarts, skills, and bare-knuckled determination to stay alive in the trenches, avoid starvation and exposure during the brutal Russian winter, survive more than one Soviet labor camp, and travel hundreds of miles to find his way back home.

Georg Rauch (1924-2006) was a professional artist who has exhibited extensively in Europe, the United States, and Mexico. For the last thirty years of his life, he and his wife, Phyllis, made their home overlooking Lake Chapala in the central highlands of Mexico.

Phyllis Rauch, writer, artist, and wife of the late artist Georg Rauch, has lived in Mexico for more than thirty years. Before that she was a branch librarian at the San Clemente Public Library in California. She is a graduate of the University of Michigan with a masters degree in English and library science.

Gr 8 Up—In this glimpse into history, Rauch, a young Jewish man in Third Reich Vienna, describes his experiences during World War II. Strongly opposed to Nazi rule, Rauch and his mother hid Jews in their apartment, helping them escape to safety, and worked with the underground resistance. But when Rauch was drafted into Hitler's army (though he admitted to having Jewish heritage), he was stationed on the Russian Front, facing the constant threat of death from hunger, the elements, and Soviet soldiers. The story is well paced, offering a fascinating and intriguing look at the era. Included also are letters between Rauch and his mother. VERDICT A good supplementary purchase for libraries looking to expand their historical memoir section, complementing titles such as Leon Leyson's The Boy on the Wooden Box: How the Possible Became Possible...on Schindler's List (S. & S., 2013).—Clair Segal, LREI, New York City