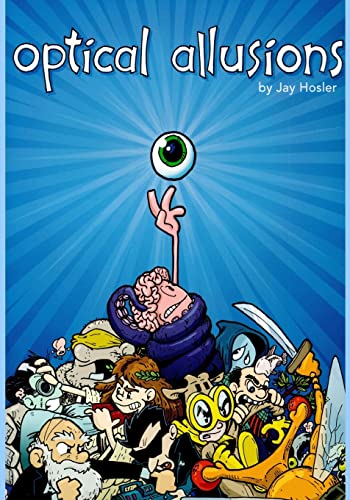 Optical Allusions is the cure for all those clamoring for a painstakingly researched, scientifically accurate, eye-themed comic book adventure! Wrinkles the Wonder Brain has lost his bosses' eye and now he has to search all of human imagination for it. Along the way, he confronts biology head on and accidentally learns more about eyes and the evolution of vision than he thought possible. And, as if a compelling story with disembodied talking brains, shape-changing proteins, and giant robot eyes wasn't enough, each tale is followed by a fully illustrated, in-depth exploration of the ideas introduced in the comic story. Following in the tradition of his first two books, "Clan Apis" and "The Sandwalk Adventures", Jay Hosler's "Optical Allusions" uses humor and adventure to weave an unforgettable story about the wonders of seeing.

Dr. Jay Hosler is an Associate Professor of Biology at Juniata College and an award-winning cartoonist who writes and draws comic books about biology and natural history. His work has been called "ingenious" (The London Times), "goofily inventive" (The New York Times), and "entertaining and slyly educational" (The Comics Journal). His works include Active Synapse classics such as Clan Apis, The Sandwalk Adventures, and Optical Allusions.