Report on Costs and Benefits of Natural Hazard Mitigation 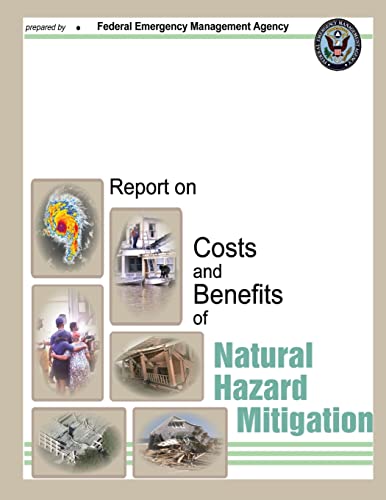 Over the last decade, the overall cost of disasters to the United States has grown significantly. From 1989 to 1993, the average annual losses from disasters were $3.3 billion. Over the last 4 years, the average annual losses have increased to $13 billion. On the Federal side alone, disasters have cost over $20 billion over the last four years. The disaster losses are equally as staggering for the American public. Since 1993, over 1.4 million Americans have been impacted by Presidentially declared disasters, resulting in the loss of their homes, property, communities, jobs, and in some cases their lives. This figure does not include the hundreds of thousands of people impacted by natural hazard events that were managed entirely at the State and local levels, and involved the personal savings and private resources of property owners. Indeed, the impacts of major disasters on Americans go well beyond those damages that are directly sustained. Recovery from disasters requires resources to be diverted from other important public and private programs, and adversely impacts the productivity of economic systems. To many, the rising costs associated with natural disasters have become unacceptable. To address this growing problem, the Federal Emergency Management Agency (FEMA), under Director James L. Witt, has encouraged the emergency management community to become more proactive in reducing the potential for losses before an event occurs. This proactive strategy is commonly known as mitigation. Hazard mitigation is defined as sustained action taken to reduce or eliminate the long-term risk to people and property from hazards and their effects. This distinguishes mitigation from other major emergency management functions such as preparedness and training, response, and short-term recovery. This emphasis on mitigation led FEMA to introduce a National Mitigation Strategy in December of 1995 to encourage a national focus on hazard mitigation. The strategy is based on the objective of strengthening the partnership among all levels of government and the private sector and to empower all Americans to fulfill their responsibilities for ensuring safer communities. The strategy was developed with input from State and local officials, as well as individuals and organizations with expertise in hazard mitigation. The strategy has two goals: to substantially increase the public awareness of natural hazard risk so that the public demands safer communities in which to live and work; and to significantly reduce the risk of loss of life, injury, economic costs, and destruction of natural and cultural resources that result from natural hazards. The reason for the emphasis on mitigation is clear. Experience at the Federal, State, and local levels during natural disasters, and a growing body of associated research, have demonstrated that the losses from such events (in terms of life, property, and community resources) can be substantially reduced when mitigation techniques and technologies are applied. This paper was prepared to illustrate the comparative benefits and costs associated with the implementation of a variety of mitigation measures by Federal, State, and local government, and private sector entities. To accomplish this, this paper will identify, through a series of case studies, the mitigation tools used to achieve cost-effective hazard mitigation benefits. The case studies are representative of the types of mitigation measures that are, or could be, performed elsewhere in the nation under similar conditions.

1. Report on Costs and Benefits of Natural Hazard Mitigation