Items related to The Four Great Covenants & The Tabernacle Of David:...

The Four Great Covenants & The Tabernacle Of David: The Dynamic Connection Between Christians & Jews 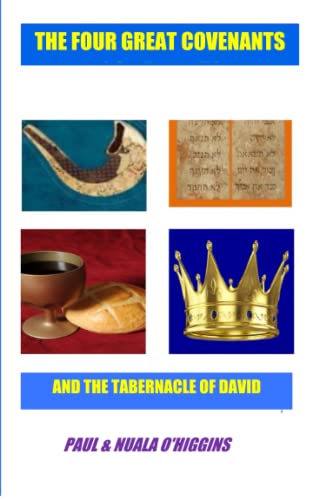 "The Four Great Covenants " shows the Biblical basis of the close connection between Christianity and Israel, and how the work of Jesus is rooted in the promises to Israel.This book is one of the clearest explanations of the roots of Christianity in the Covenants God made with Israel.Christianity is shown as the flowering of God's promises to Israel rather than a replacement of them.'The Tabernacle of David" is a remarkable explanation of how the restoration of Israel today and the flowering of Christianity world-wide are dynamically intertwined. The connection between the presnt-day restoration of Israel and the present day restoration of the power of the Book of Acts was foretold by the prophets.

Paul & Nuala O’Higgins are natives of Ireland now residing in Stuart, Florida, the base of their international, prophetic teaching ministry - Reconciliation Outreach. Paul has a doctorate in Biblical Theology and Nuala’s degree is in Education. They travel extensively to many different nations. They are authors of several books including “In Israel Today With Yeshua” “ Good News in Israel's Feasts", "The Four Great Covenants" & "Christianity Without Religion". They are among those called to recover the Church’s connection with Israel and its responsibility to the Jewish people.

1. The Four Great Covenants and the Tabernacle of David : The Dynamic Connection Between Christians and Jews

Book Description CreateSpace Independent Publishing Platform. Paperback. Condition: As New. An apparently unread copy in perfect condition. Dust cover is intact; pages are clean and are not marred by notes or folds of any kind. At ThriftBooks, our motto is: Read More, Spend Less. Seller Inventory # G1482696584I2N00