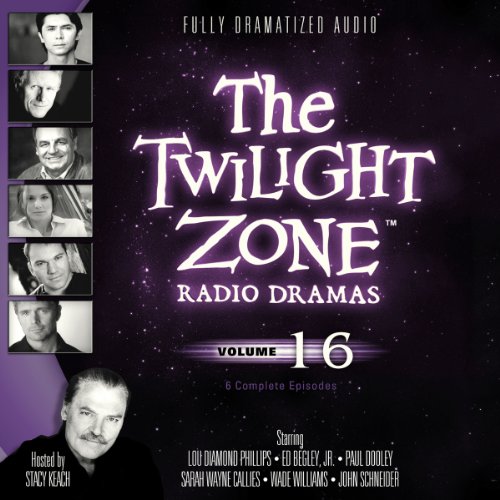 [*Hosted by Stacy Keach] -- Experience one of television's greatest science fiction series: The Twilight Zone. This collection of episodes is fully dramatized for audio and features a full cast, music, sound effects, and narration by some of today's biggest celebrities.

Miniature (starring Lou Diamond Phillips) -- A shy bachelor discovers a miniature doll apparently alive inside a nineteenth-century dollhouse. Fascinated, he whiles away the hours peering into this little world and wishing he were part of it.
The Jungle (starring Ed Begley, Jr.) -- A prospector, threatened with death by a native conjuror for violating African land, feels himself being stalked in the deserted streets of Manhattan by a giant jungle beast.
The Mighty Casey (starring Paul Dooley) -- A broken-down baseball team soars when a new player, a human-looking robot, pitches shut out after shut out. After it is discovered that he's a robot, the only way he will be allowed to continue to play is if he is altered to become more human.
Ring-a-Ding Girl (starring Sarah Wayne Callies) -- Movie star Bunny Blake makes an unexpected visit to her hometown after receiving a strange ring that predicts the future. Her visit becomes more important than anyone can predict.
Mute (starring Wade Williams) -- Experimenting with the powers of telepathy, a mother and father try to raise their daughter in a world free of verbal communication.
Nightmare at 20,000 Feet (starring John Schneider) -- A newly released mental patient is the only one able to see a gremlin ripping up the wing of his airliner.

Stacy Keach is perhaps best known for his portrayal of hard-boiled detective Mike Hammer. He played Ken Titus on the sitcom Titus, Warden Henry Pope in the hit series Prison Break, and has been seen in numerous film and stage productions. He won a Golden Globe for his portrayal of Ernest Hemingway and starred as Richard Nixon in the US National Tour of Frost/Nixon. His performance in the title role of King Lear has received international acclaim.

Carl Amari is the producer of the Twilight Zone radio drama series. He is also the host of Hollywood 360, a popular radio show that produces a wide variety of audio entertainment.