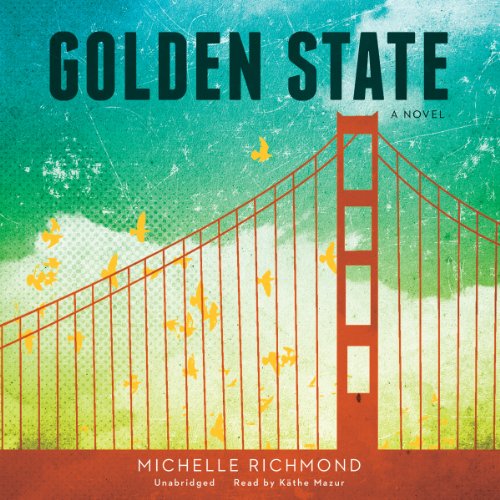 Five years in the making, Golden State is both a political thriller and a meditation on marriage, love, and loyalty. Like The Year of Fog, it is a page-turner with a philosophical bent. -- Dr. Julie Walker wakes on a summer morning in San Francisco to find a city in chaos. Today Californians are voting on a controversial ballot initiative that will change history. With the future of the state and the nation uncertain, the streets have erupted into violence. (previously titled 'California Street') -- Injured, Julie must make her way across the city by foot to the Veterans Administration Hospital, where her sister, recently returned from Afghanistan, is in labor. At the hospital a brutal scene is unfolding as a man who shares an intimate past with Julie begins to take his revenge. Throughout the ordeal Julie's estranged husband, desperate for reconciliation, sends out coded messages from the radio station where he is the well-known Voice of Midnight.

Golden State began several years ago with the idea of a woman making her way on foot from one end of San Francisco to the other. I envisioned a journey of one day, a day on which the narrator's past and present would collide. Julie Walker, who grew up in poverty in rural Mississippi, has made a good life for herself in California. She is a doctor at the Veterans Administration hospital, and she has enjoyed many happy years as a wife, mother, and physician.
Now, on the eve of her fortieth birthday, it all seems to be falling apart. Her marriage to Tom, a radio personality with whom she is still in love, is dissolving. At the same time, she is attempting to repair her relationship with her sister, Heather, who is about to give birth. And years after losing her own child, Julie is struggling with her inability to forgive Heather, whom she holds responsible for the tragedy.
All of this happens against the backdrop of a San Francisco in chaos, as Californians are voting on whether or not to secede from the United States. I wanted to explore the idea that events that seem outlandish or impossible are often just around the corner. As Tom declares, week after week, in his nationally syndicated radio show, "Anything is possible." The title, GOLDEN STATE, is a nod to the idea of California as the golden ideal, a place where people go to reinvent themselves. But when you scratch the surface of a gilded thing, you always find its hidden imperfections.
Golden State is a story about relationships--about what happens when the impetus to disconnect is stronger than our desire to stay together. It is also a story about change: we become accustomed to a certain narrative of our lives, both personal and public. What happens when that narrative is disrupted? What happens when we are forced to recalibrate everything? How do we start over? How do we forgive?
It took me five years to write Golden State. I will admit that I poured everything into it: my experiences as a wife and the mother of a young child, my memories of the deep South, and my love for the strange and messy and wonderful experiment that is San Francisco. I am so thankful to the readers who have read The Year of Fog and No One You Know, and so honored to have received your emails and read your reviews. I hope that Golden State will speak to you.
And by the way, I love to hear from readers! You can always communicate with me through my website, michellerichmond.com, or through my twitter and facebook accounts.

Michelle Richmond is the author of  the New York Times bestseller The Year of Fog, as well as Dream of the Blue Room and The Girl in the Fall-Away Dress. Her stories and essays have appeared in Glimmer Train, Playboy, the Oxford American, and elsewhere. She has been a James Michener Fellow, and her fiction has received the Associated Writing Programs Award and the Mississippi Review Prize. A native of Mobile, Alabama, Michelle lives with her husband and son in San Francisco.