Items related to Have Space Suit - - Will Travel

Have Space Suit - - Will Travel 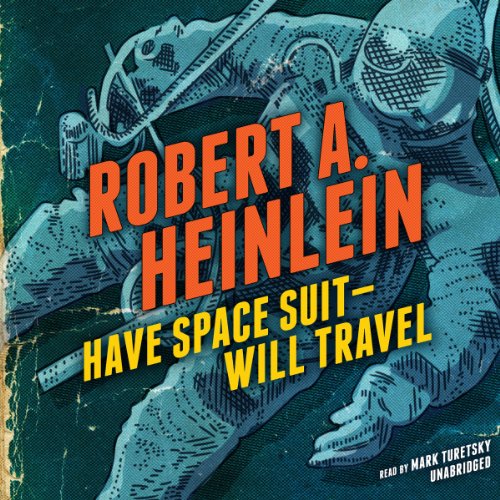 From the mind of the storyteller who has captured the imagination of readers from around the world and across generations comes this classic work of science fiction. -- First prize in the Skyway Soap slogan contest was an all-expenses-paid trip to the moon. The consolation prize was an authentic space suit, and when scientifically minded high school senior Kip Russell won it, he knew for certain he would use it one day to make a sojourn of his own to the stars. But ''one day'' comes sooner than he thinks when he tries the suit on in his backyard -- and finds himself worlds away, a prisoner aboard a space pirate's ship. The whole thing seems like a bad dream until he discovers he's not the only prisoner on board. Kip--along with the daughter of a world-renowned scientist and a beautiful creature from another planet--has been kidnapped by a monstrous extraterrestrial, and they are heading straight for what could be Kip's final destination.

Like many people, I go way, way back with Heinlein. My very favorite book (and one that stands out in my mind--and with much affection--to this day) is Tunnel in the Sky. I really, really wanted to go off to explore new worlds with a covered wagon and horses, like the hero does at the very end of the book. But one of the nice things about Robert Heinlein is that he's got something for everyone. One of my best friends has a different favorite: Podkayne of Mars. Go figure.
--Shelly Shapiro, Executive Editor

One minute Kip Russell was walking about in his backyard, testing out an old space suit and dreaming about going to the Moon -- and the next he was out cold, the captive of an insidious space pirate. The whole thing seemed like a bad dream until Kip discovered there were other prisoners on board, and they were all on their way to the Moon -- and a fate worse than death!

2. Have Space Suit - Will Travel