Items related to The Half Has Never Been Told: Slavery and the Making...

Edward E. Baptist The Half Has Never Been Told: Slavery and the Making of American Capitalism

The Half Has Never Been Told: Slavery and the Making of American Capitalism 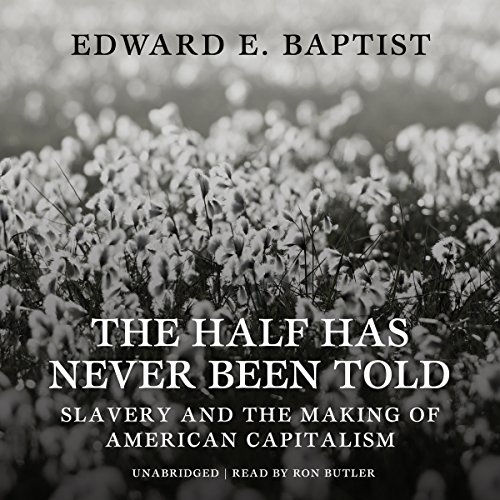 In The Half Has Never Been Told, historian Edward E. Baptist reveals the alarming extent to which slavery shaped our country politically, morally, and most of all, economically. Until the Civil War, our chief form of innovation was slavery. Through forced migration and torture, slave owners extracted continual increases in efficiency from their slaves, giving the country a virtual monopoly on the production of cotton, a key raw material of the Industrial Revolution.

As Baptist argues, this frenzy of speculation and economic expansion transformed the United States into a modern capitalist nation. Based on thousands of slave narratives and plantation records, The Half Has Never Been Told offers not only a radical revision of the history of slavery but a disturbing new understanding of the origins of American power that compels listeners to reckon with the violence and subjugation at the root of American supremacy.

Edward E. Baptist is an associate professor of history at Cornell University. Author of the awardwinning Creating an Old South, he lives in Ithaca, New York.

"The overwhelming power of the stories that Baptist recounts, and the plantation-level statistics he's compiled, give his book the power of truth and revelation."
―Los Angeles Times

"Thoughtful, unsettling.... Baptist turns the long-accepted argument that slavery was economically inefficient on its head, and argues that it was an integral part of America's economic rise."―Daily Beast

"Wonderful.... Baptist provides meticulous, extensive, and comprehensive evidence that capitalism and the wealth it created was absolutely dependent on the forced labor of Africans and African-Americans, downplaying culturalist arguments for Western prosperity."―Nation

"By far the finest account of the deep interplay of the slave trade...and the development of the U.S. economy."―Stephen L. Carter

"Baptist has a knack for explaining complex financial matters in lucid prose.... The Half Has Never Been Told's underlying argument is persuasive."―New York Times Book Review

"Baptist's real achievement is to ground these financial abstractions in the lives of ordinary people. In vivid passages, he describes the sights, smells and suffering of slavery. He writes about individual families torn apart by global markets. Above all, Baptist sets out to show how America's rise to power is inextricable from the suffering of black slaves."―Salon

"You cannot understand the economy of the U.S. - or even of the world -without an understanding of how its development was driven by 19th century slavery. This book gives you that, in a stunningly readable, heartbreaking form. Genius."―Mark Bittman, Omnivoracious

"It taught me so much about slavery and how slavery enabled America to become America. Every time I left my house after reading, I saw the world differently. I saw the legacy of human misery underpinning it all."―Jesmyn War, author of Salvage the Bones and Men We Reaped

"Baptist has a fleet, persuasive take on the materialist underpinnings of the 'peculiar institution.'"―Colson Whitehead, Mashable

1. The Half Has Never Been Told: Slavery and the Making of American Capitalism

2. The Half Has Never Been Told: Slavery and the Making of American Capitalism