Items related to Lone Star Politics: Tradition and Transformation in... 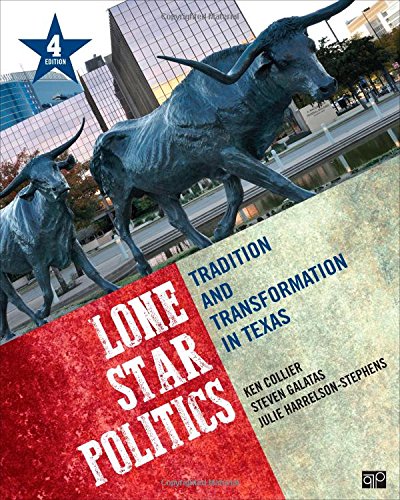 Ken Collier is a professor at Stephen F. Austin State University, with a PhD from the University of Texas at Austin. He is the author of Between the Branches: The White House Office of Legislative Affairs and Speechwriting in the Institutionalized Presidency: Whose Line Is It? He has published articles in such journals as Journal of Politics, White House Studies, Presidential Studies Quarterly, Public Choice, and Social Science Quarterly. His research and teaching currently focus on presidential speechwriting and Texas politics.

Steven Galatas is an associate professor at Stephen F. Austin State University, with a PhD from the University of Missouri. He has published articles in Journal of Politics, Public Choice, Party Politics, Politics and Policy, and PS: Political Science and Politics. His research and teaching concern comparative elections, voting behavior, and Texas judicial and legislative elections.

Julie Harrelson-Stephens is an associate professor at Stephen F. Austin State University, with a PhD from the University of North Texas. She has co-edited, with Rhonda L. Callaway, Exploring International Human Rights: Essential Readings and has been published in Conflict and Terrorism, PS: Political Science and Politics, Human Rights Review, and International Interactions. Her primary research interests include human rights, regime theory, and the Texas governor.

"Lone Star Politics’ coverage of Texas politics is very comprehensive and its emphasis on topics and scholarship is exemplary. I am positively impressed with the book’s strong narrative of Texas politics, including well-rounded and contextual explanations of the constitution, political institutions, policy making, and governance, not to mention its comparative analysis of Texas and other states, ‘Winners and Losers,’ and other features. This is a top quality book." Author: Gabriel Da Ume

"The strength of Lone Star Politics is found in the work’s accessible portrayal of Texas’s intricate political heritage. The state has a reputation of mythological proportions given its fight for independence, its perpetually changing constitutions, its struggle between traditional and modern political attitudes, and its perpetual desire to preserve freedom and individual autonomy. Collier, Galatas, and Harrelson-Stephens have found a way to weave through this complex political history to present the defining characteristics of the Texas political systems as it stands today. It’s a quality text for education." Author: Brian Naples

"The authors of Lone Star Politics not only ably describe the structure, operation, and dynamics of the Texas governmental and political system, but put into context the changes that have taken place and the transformations that are likely to occur. The book presents the ongoing challenges of governing Texas in a way that avoids being proscriptive and dogmatic. Students become engaged in the important debate on what the future of Texas is going to look like―an essential involvement if students are going to take the subject seriously." Author: M. Theron Waddell