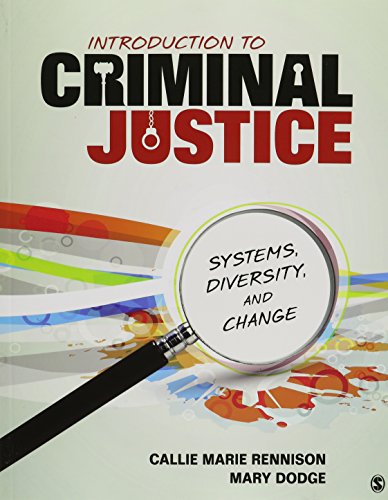 Bundle the Print Version of Introduction to Criminal Justice with the Interactive eBook for FREE!

Introduction to Criminal Justice: Systems, Diversity, and Change offers a brief, accessible approach to Criminal Justice with comprehensive and up-to-date coverage of all aspects of the criminal justice system in 14 succinct chapters. Using four running cases that appear in each chapter, students are given real-life examples of the pathways and outcomes of criminal behavior and victimization. Designed to show the interconnectivity within the criminal justice system, each case study provides concrete examples of events, concepts, and terms. Additionally, coverage of unique topics such as ethics, diversity, policy, gender, victimization, and white-collar crime are included throughout the text. Offered both in print and Interactive eBook editions, this text provides flexibility for different modes of instruction and appeals to students of all learning styles.   Please contact your Sales Representative for more information.

Callie Marie Rennison is the Director of Equity, and Title IX Coordinator at the University of Colorado Denver | Anschutz Medical Campus. In addition, she is a full professor, and former Associate Dean of Faculty Affairs in the School of Public Affairs, University of Colorado Denver. She earned a PhD in 1997 in political science from the University of Houston, University Park. Her areas of research interest include investigating the nature, extent, and consequences of violent victimization, with an emphasis on research methodology, quantitative analysis, and measurement. Much of this research focuses on violence against women, violence against minority groups such as African Americans and Hispanics, crime data, and victim interaction with the criminal justice system. Callie recently served on a National Academies committee examining domestic sex trafficking of minors in the United States. Her research has appeared in numerous journals, including the Journal of Quantitative Criminology, Justice Quarterly, Violence and Victims, and Violence Against Women. Callie has taught a variety of graduate and undergraduate courses, including statistics, research methods, murder in America, crime and the media, and introduction to criminal justice.