Items related to A Hardboiled Murder: An Aggie Underhill Mystery 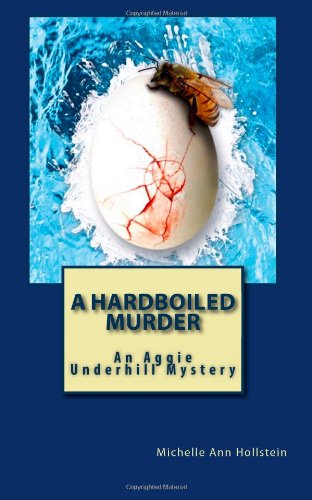 The body of a film star crashes upon the roof of a moving tramcar, a mystery author is discovered hardboiled and bobbing in a hot tub, a home is ransacked, and two grandmothers are battling.
With bleached blonde hair, an English accent, a brand spanking new red-hot turbo machine, and an oversized pocketbook to match every outfit, Aggie's sure to stick her nose into everyone's business.  But is Aggie over her head when the clues she unearths hit a little too close to home?  Join Aggie in another fun-filled Palm Springs mystery.  Who knew the desert could be so much fun?

Michelle Ann Hollstein currently resides in Southern California with her two wonderful children and her spoiled pup, Dougal.  She has a Bachelors Degree in Art Studio with a concentration in painting that she obtained from the California State University of Sacramento.    She is the author of the fantasy trilogy: The Niberia Chronicles, the cozy mystery series: An Aggie Underhill Mystery, a new nonfiction series of acrylic painting books; Who Says You Can't Paint?, as well as the author of the Young Adult Paranormal series: the Lost Souls Novels, written under the name Michelle Matkins.  She's currently hard at work writing her next novel and enjoying every second of it.You can visit her website at MichelleHollstein.com to view book trailers and to learn more about her books.

Book Description CreateSpace Independent Publishing Platform. Paperback. Condition: As New. An apparently unread copy in perfect condition. Dust cover is intact; pages are clean and are not marred by notes or folds of any kind. At ThriftBooks, our motto is: Read More, Spend Less. Seller Inventory # G1484175646I2N00