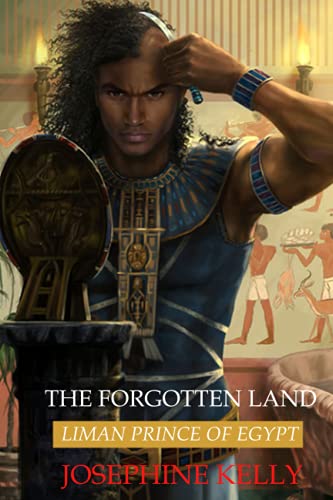 Liman Prince of Egypt is part I of "The Forgotten Land" books trilogy by Josephine Kelly. Storyline: Four years old Liman, young Egyptian prince and heir to the throne, is left for dead and his mother the queen killed by her jealous brother. Helped by the beings of light, Liman escapes the wrath of his uncle just in time. He embarks on a ship that takes him far away from Egypt. Suffering from amnesia, he is raised to be a simple fisherman. With chiseled, handsome features, the now nineteen years old Liman, definitely attracts the ladies. One day, falsely accused of stealing, he gets arrested. He is sold as a slave against his will and finds himself on a ship to Egypt. His path is quickly set in motion as fate takes him for a ride. He narrowly escapes a sinking ship, flees from the grasp of slave traders, and fends off savage dogs attack. Battered and bruised, Liman finds himself in a Greek palace where princess Isa, nurse him to health. From this encounter, grows love between the two of them. But this romance would not last long as Liman's past catches up with him. Wondering in the palace's treasure room, he stumbles upon an ancient Egyptian relic, the journal of Imana, the ancient Pharaoh. At the touch the journal, the beings of light are made aware of Liman's survival and location. Slowly, they help unveil his lost memory. Now aware of his roots, Liman makes the difficult decision to sacrifice his love for Isa in order to return home and fulfill his destiny. Thus he embarks on a journey that will lead him to back stabbers, undead monsters, and guards that will work to sabotage him. With the help of stunning illustrations, strong characters and skillfully written descriptions, The Forgotten Land - Liman Prince of Egypt will take you on a epic and mystical ride into Ancient Egypt.

Josephine Kelly was born in Paris on August 3rd 1980. Daughter of a stewardess, Josephine had the chance to accompany her mother to many countries, piquing her curiosity, love and knowledge of other cultures. Dreamer by nature and passionate of ancient history, in 2008 she developed The Forgotten Land books.