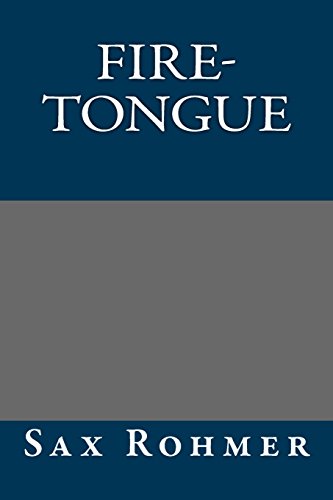 A new force stalks the fog-shrouded streets of London, bringing death to its victims ... the mysterious Fire-Tongue! Psychic detective Paul Harley investigates, in this mystery classic with supernatural elements. From the author of the Fu Manchu

"Fire-Tongue," he said. "Nicol Brinn." These are the last words of Sir Charles Abingdon, who was convinced he was being followed through the streets of London. Fortunately, the man who heard this his cryptic message was Paul Harley, an investigator Sir Charles hired to discover who was stalking him, who stole a manuscript from his study, and who called him away from his home on the night of his death. Paul Harley is no ordinary investigator. He'd done highly confidential work in the Near East and was "an unofficial field marshal of the forces arrayed against evildoers."

But that's not the only characteristic that sets Harley apart -- he's guided by his sixth sense. "It was an evasive, fickle thing, but was nevertheless the attribute which had made him an investigator of genius." Harley will need all of his talents -- and his extra-sensory perception -- to solve the riddle of the Fire-Tongue.

SAX ROHMER, born Arthur Henry Sarsfield Ward in Birmingham, England, is best known as the creator of the Dr. Fu Manchu series of books, which also spawned movies, a TV series, a radio serial, and a Marvel comic. Besides his detective stories, Rohmer also wrote on occult themes in Brood of the Witch Queen, Grey Face, and The Green Eyes of Bast. He joined the Hermetic Order of the Golden Dawn, whose other members included Aleister Crowley and William Butler Yeats.

Book Description CreateSpace Independent Publishing Platform. Paperback. Condition: As New. An apparently unread copy in perfect condition. Dust cover is intact; pages are clean and are not marred by notes or folds of any kind. At ThriftBooks, our motto is: Read More, Spend Less. Seller Inventory # G1490964274I2N00