Items related to For the Cause: The Cold War Turns Hot in Korea and...

Alfred Wellnitz For the Cause: The Cold War Turns Hot in Korea and Why Young Men Went to War

For the Cause: The Cold War Turns Hot in Korea and Why Young Men Went to War 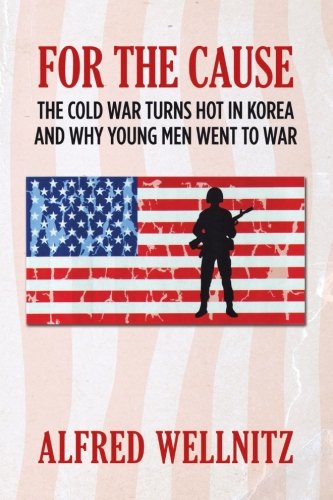 Two young South Dakota farm boys, Pete Houser and Chris Engleson, with uncertain futures decide to join the marines  as an alternative to some other mundane job.
It is 1950 and they complete boot camp just as the Korean War suddenly erupts. Chris finds himself assigned to the First Provisional Marine Brigade being hurriedly put together to be deployed to Korea. Pete is assigned to a marine unit providing base security for the Sangley Point Naval Air Station in the Philippines. The story follows the lives of the two young men during the last six months of 1950 while Chris in Korea is involved in the Pusan Perimeter, Inchon and the Chosin Reservoir battles and Pete spends his time as a security guard in the Philippines. Over a short period of time Chris goes from a green farm boy to a seasoned warrior and Pete's world expands quickly as he encounters unfamiliar moral standards and first love. The story alternates between Chris in Korea and Pete in the Philippines until the story comes to a surprising conclusion.

In writing For the Cause My first plan had been to write a short novel, a novella, which would concentrate on the part of the For the Cause story that took place in the  Philippines. The two main characters, Pete and Chris, would appear in the novella with Pete in the Philippines and Chris in Korea but the Korean War would be in the background. However, as I researched the Korean War I began to understand the epic role played by the marines in the early months of that war. I had been in the Navy during the Korean War and spent two years during that time in the Far East as a crewman on navy reconnaissance planes. As involved as I had been in the Korean conflict I found I didn't have an appreciation of the role played by the marines during that war. For example, I believed the Chosin Reservoir battle had been an embarrassing defeat for the marines. I learned during researching the subject that the Chosin Reservoir battle is considered to be one of the Marine Corps finest hours. I hadn't understood the tremendous odds the marines had to overcome in the successful withdrawal from the Chosin Reservoir nor the background and politics that had put the marines in the exposed position they were in at the time. It occurred to me that if I, as a participant in the conflict, did not appreciate the pluck and skill shown by the marines during the conflict, most other people would have even a less complete knowledge of the Korean War and the role the US Marines played in it. The Korean War has been called the Forgotten War and I realized For the Cause could be a means of revealing some of its history so others could become more aware of what had occurred during the Korean war. As a result the book  For the Cause became a full length novel with an expanded purpose.

Alfred Wellnitz grew up in rural South Dakota, served in the United States Navy and worked in technology as an electrical engineer. After retiring from engineering he worked as a real estate agent before deciding to become an author at age seventy-three. He has since published three novels and numerous short stories. Alfred's first novel Finding the Way was awarded an Honorable Mention in the 13th Writer's Digest International Self-Published Book Awards and PushBack was a finalist in the ForeWord Reviews' Book of the Year Awards. Alfred now lives with his wife Joan in Bloomington Minnesota.

1. For the Cause: The Cold War Turns Hot in Korea and Why Young Men Went to War